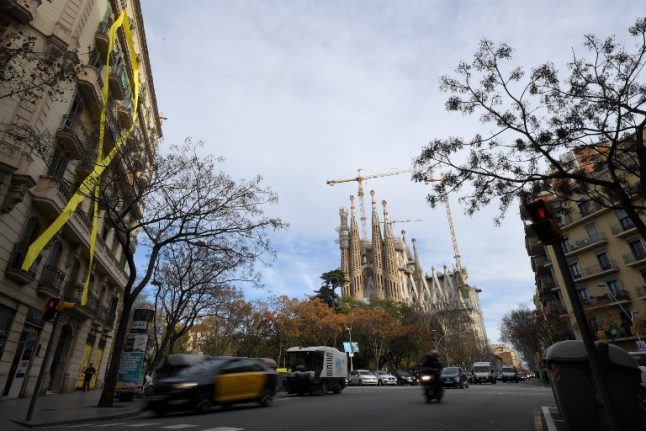 A giant yellow ribbon hanging from a facade in front of the Sagrada Famila Basilica in Barcelona. Photo: AFP

Hotel revenues fell by 7.3 percent in July, and by 20 percent in August, the Gremi Hotels Barcelona group, which represents around 400 establishments in the city, said in a statement.

To keep up their occupancy rates, which fell by just 0.7 percent in July, and by 1.0 percent in August, Barcelona hotels have had to slash their prices considerably, leading to lower revenues, it added.

The group blamed protests against tourism in Spain's second largest city, a deadly van attack on its famous Las Ramblas boulevard in August 2017 which was claimed by the Islamic State group, and especially political tensions over Catalonia bid to break away from Spain for the fall in revenues.

“The international press spoke of this conflict, of a shaken Catalonia, and this has helped create a negative image. As a result, Barcelona's reputation as a tourist destination has suffered,” the president of the association, Jordi Clos, told a news conference.

As the capital of Catalonia, a wealthy northeastern region accounting for one fifth of Spain's economic output, Barcelona has been especially heavily hit by the independence crisis.

Hundreds of businesses have moved their headquarters to elsewhere in Spain since the region went ahead with a banned referendum on independence on October 1st.

Big protests following that vote and the decision of the regional parliament to declare secession on October 27 are thought to have dented visitor confidence.

The number of foreign tourists visiting Spain fell by 4.9 percent in July, its first drop during the key holiday month since 2009 as European sunseekers returned to cheaper rival sunshine destinations like Turkey and Tunisia, according to national statistics institute INE figures published Monday.