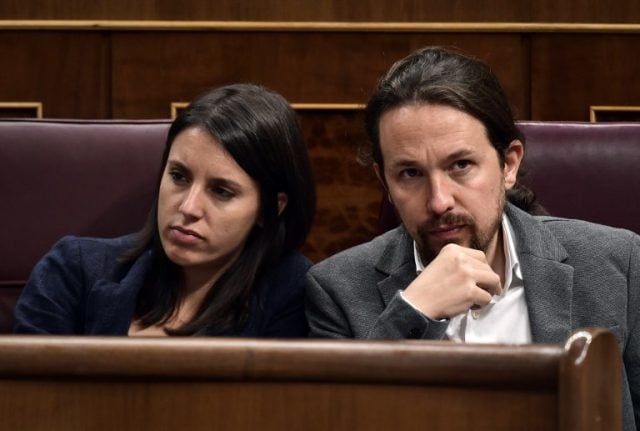 Irene Montero and Pablo Iglesias . Photo: AFP
The pair thanked their political rivals for extending warm wishes, acknowledged that as “republicans” they wanted to thank Spain’s King Felipe VI and Queen Letizia for their personal messages, and as atheists, those friends and family who prayed for them.
READ MORE: Podemos twins arrive three months early

The pair also thanked those mothers who donated breast milk to sustain the twins when their own mother couldn’t produce enough.

The leader of Podemos and the spokeswoman of the party, who are back on the political scene after taking a break from politics since their sons arrived in the world three months early on July 3rd, said their twins were “growing stronger day by day”.

In public posts on Facebook, the couple said that Leo and Manuel Iglesias Montero, born at just 26 weeks into the pregnancy, were extraordinarily lucky to have been born “in a country which has something so much more important than any national anthem or flag: a free and universal health service.”

“Many premature babies like our children, in other parts of the world, do not have the same luck – our children are now two months old, because they were born in a country which has something so much more important than any national anthem or flag: a free and universal health service,” they wrote.

“We'll tell them later that nothing deserves more loyalty than this. The fact they are alive, and their health, are not just the result of medical and scientific advances, but also that of a society which still ensures the best possible care for any person living in it, whatever their social status.”

They praised the health service in general but also singled out individual doctors and nurses at the premature baby unit of Madrid’s Gregorio Marañón Hospital for the exemplary care given.

And revealed that it had been thanks to donations from other lactating mothers that had sustained the boys in the first critical days.

“Before they were able to feed solely off Irene's milk, it was milk from other mothers which helped them survive – and as soon as she was producing enough, Irene's milk was also donated to help other babies live,” Iglesias said.

“The State health system has made our children 'milk brothers' of many other tiny little girls and boys like them.”

The couple also used the letter to say they were moved by the sincerity of their most ardent political rivals.

“We're Republicans, but will always remember how a King and a Queen phoned us to ask after our children.

“We're atheists, but we'll tell our children when they grow up that our friends who do believe prayed round the clock for them. We have it on authority that the Virgen del Tránsito, Santa Rosa de Viterbo and Santa María Liberatrice were called upon (and you never know…),” the letter continued.

“There are few more gestures of love and friendship that are more beautiful than this, and we'll teach our children that they should always respect those who hold different beliefs from their own because humanity, decency and friendship are not the exclusive heritage of any single cause,” they wrote.

READ ALSO: The perks and quirks of having a baby in Spain