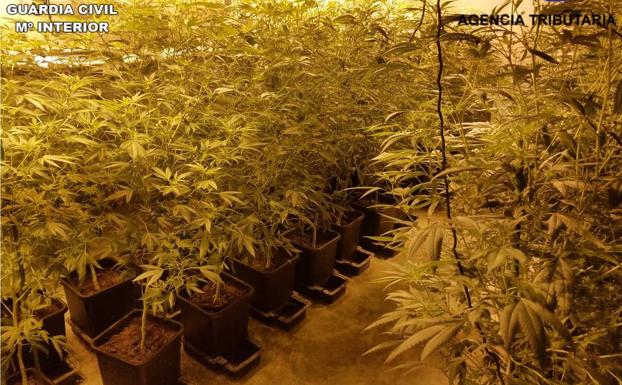 Guardia Civil officers discovered more than 60kgs of cannabis hidden instead heavy machine en route to Britain via a cargo flight from Madrid airport, the traced the smuggling attempt back to a gang running operations from a Benidorm campsite.

Investigators believe the criminal organisation ran a drug supply route between southern Spain and the UK as well as supplying holidaymakers in Benidorm and across the Costa Blanca region, using caravans to store and sell drugs including cocaine and cannabis resin.

The bust led to the arrest of three British men aged 39, 42, and 64 and a 29-year-old British woman at the campsite as well as a 36-year-old Lithuanian man. A fifth Brit connected with the organisation was found to already be in custody in a Madrid jail on a European Arrest Warrant.

”A joint investigation by the Civil Guard and Tax Agency led to the dismantling of a criminal organisation in Benidorm involved in drugs trafficking at a campsite,” said a statement from the Guardia Civil in Alicante.

“Six people including five Brits have been arrested on suspicion of drugs offences and membership of a criminal gang.”

“The members of this largely British-led organisation thought this campsite, where 2,500 people stay in high-season, was the ideal place to base their centre of operations among compatriots.

'One of the alleged ringleaders of the group resided there permanently and controlled seven plots with caravans used to store and sell the drugs.

'Investigators concluded the drug trafficking gang had reached international dimensions and had established a route between the UK and Spain.

“To arrest the last of the six detainees, a British man aged 36, the Civil Guard had to go to a prison in Madrid where he was being held prior to his extradition to the UK as the alleged author of a serious assault.”