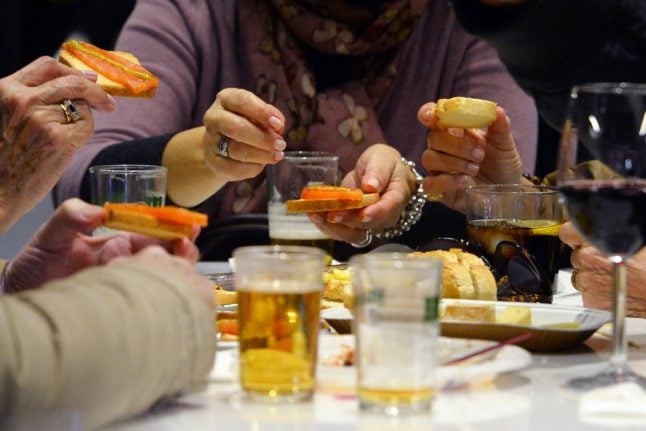 Madrid isn't one of the free tapas capitals of Spain, but it still houses a handful of bars that give generous amounts of grub completely 'gratis' (free). (Photo by GERARD JULIEN / AFP)

Stopping at a bar for a caña (small beer) and some tapas is an intrinsic part of the Spanish lifestyle, and one that’s often a lot cheaper than eating out in the conventional sense.

If you’re not familiar with the drill, tapas are small plates of food that are traditionally served for free with every drink in bars and taverns.

The more cervezas or vinos your order, the more grub you get.

It’s a practice that’s steeped in myth, with old wives’ tales suggesting tapas were decreed by a Spanish king who wanted to stop his people from getting too drunk to not work, or that another Spanish royal was advised by his doctors to eat with every drink so that no one would notice how often he was drunk.

Tapas fables aside, many bars across Spain no longer offer free tapas, although a number of cities such as Granada, Salamanca and Badajoz do have a reputation for sticking to the gratis approach.

Madrid unfortunately is not one of them, with the majority of bars not giving up the free tapas tradition fully, but still reducing portion sizes to a minor nibble that will hardly fill you up. However, in a city with 15,000 bars (one for every 211 residents) there were bound to be a few exceptions that have remained true to custom and where you can be wined and dined for under €10.

Here are ten tried and ‘tasted’ bars in Madrid where you get ample free tapas with your drink, one for each barrio (neighbourhood).

For quick access to Google Maps to find out where exactly they are, click on the neighbourhood name for each bar.

Cramped and often busy, this friendly bar in upmarket Argüelles offers Spanish classics ensaladilla rusa (Spanish potato salad), tortilla and cold meats for free with every drink. Make it an early lunch or dinner to have more space to move around. A five-minute walk from Spain’s Parliament is this cosy, slightly hidden corner bar in the historic Barrio de las Letras. Everything from the waiters to the tapas are ‘castizos’ (authentically Spanish).

They favour quantity over quality in this iconic spot in Madrid’s gay neighbourhood. The gargantuan free servings of food result in it often being packed to the brim but you can always head to the nearby El Respiro (The breather) for exactly that…and some patatas con salchichas y pimientos (potatoes, sausages and pepper mix), pollo al ajillo (garlic chicken), empanadillas (meat pies) and paella.

As the name suggests, this restaurant in Madrid’s affluent Goya has a marked southern Spanish feel to it, from the décor to the generosity of its portions. And the quality of the free tapas isn’t at all bad either (fried sardines, calamari, meatballs), making it a popular spot with young people and office workers in the area alike.

Another tapas freebie option slap bang in the centre of la capi (the capital). The name sounds like the Spanish expression for “bad vibe” (mala espina) but nobody seems to be complaining about the huge free tapas of ensaladilla rusa, homemade meatballs, mussels, sausages, lacón (pork shoulder) and chicken wings.

Taking its name from the Andalusian city of Granada, where delicious free tapas are the norm, this restaurant offers free or dead cheap sides such as goats cheese and crispy bacon on toast, spicy meat wrap and boletus mushroom croquettes, making it a more refined choice than most other eateries on the list.

If you’re in the working-class neighbourhood of Legazpi and you’re feeling thirsty and peckish, head to this Atlético de Madrid-themed bar where the best free tapa on offer is roasted peppers with cumin.

Not far from Madrid’s university district is this aptly named free tapas bar called “happiness”. It’s certainly put smiles on many young hungry faces with it’s free tapas which include paella and other classics.

Casa Pepe, known as Pepe el Guarro (Pepe the pig) is one of the best known free tapas bars in the north of the city.

And it’s not because of the poor quality of the food that the bar owner has received this nickname but rather because the floor is routinely adorned with chicken bones that customers throw on the ground after finishing their free tapas serving.

Madrid’s hipster haven is perhaps the barrio with most free tapas bars. Pestiqueira is a spacious bar offering free big portions that are fairly tasty.