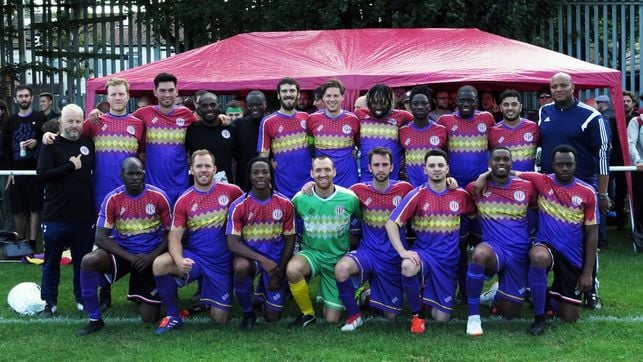 They play in the twelfth tier of English football, their ground is called the Old Spotted Dog and you’ve probably never heard of them.

But Clapton CFC are currently seeing thousands of Spaniards join their fanbase thanks to the club’s new second kit, a surprising homage to Spain’s Republic. Everything from the colours (red, yellow, purple) to the slogan No Pasarán (They shall not pass) written on the neck is symbolically dedicated to La República.

They even added three-pointed stars to the front of the jersey to honour the International Brigades, who travelled to Spain to try to contain General Franco’s fascist troops. Clapton CFC’s owners chose this tribute to mark “the 80th anniversary of the end of the Spanish Civil War” but its not the first time the community squad has voiced its anti-fascist sentiment.

In fact its strong political stance against sexism, homophobia, xenophobia and fascism has in recent years seen hundreds of international fans from Italy, Spain, Poland and England head to the Old Spotted Dog every fortnight to cheer the team.

.@ClaptonCFC I just bought your tribute to The International Brigades. Thanks for keep alive their courage and memory. #NoPasaran #WeAreTheClapton pic.twitter.com/5jrmKosos7

From a marketing standpoint, the Republican kit has been a real winner for Clapton CFC.

They’ve managed to sell 2,500 kits in just 48 hours, earning the modest squad €66,000 in the process. Most of the orders unsurprisingly came from Spain, with one fan tweeting “from today onwards, you’re the second club of many Spaniards”.

Such was the demand for the new jersey that on Sunday Clapton CFC’s website crashed due to the sheer volume of online shoppers.

Apologies but due to the absolutely huge number of people visiting our website today, it has now crashed. We're working on it! pic.twitter.com/bvFYLzkoYd

It’s fantastic news for a club that’s entirely owned by its fans, given that Clapton CFC was only formed recently as a breakaway club from Clapton FC following a dispute between supporters and the chairman.

If you'd like to buy Clapton CFC's new 'Spanish Republic' kit, here's the link to their store.