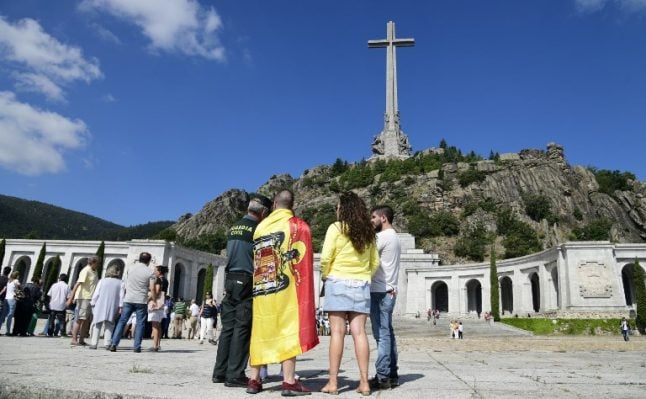 People gather in a protest against the removal of Franco's remains from The Valley of Fallen. Photos: AFP

Prime Minister Pedro Sanchez, who came to power in June after he ousted his conservative predecessor in a confidence vote, has made removing the late dictator from the divisive monument in the Valle de los Caidos (Valley of the Fallen) near Madrid one of his priorities.

“As an established and European democracy, Spain cannot allow for symbols that divide Spaniards,” Sanchez told public broadcaster TVE shortly after he came to power, adding such a mausoleum would be “unthinkable” in other European nations that had fascist dictatorships like Italy and Germany. Friday's decision was announced by Deputy Prime Minister Carmen Calvo, but the decree will still have to be approved in parliament.

Sanchez's Socialists argue the goal is to convert the site into a place of “reconciliation” and memory for all Spaniards.

Ander Gil, the head of the Socialists' group in the Spanish Senate, said Friday that the government wants to end the “democratic anomaly” of having a “mausoleum dedicated to a dictator”.

Franco, who ruled Spain with an iron fist from the end of the 1936-39 civil war until his death in 1975, is buried in an imposing basilica carved into a mountain-face just 50 kilometres (30 miles) outside of Madrid with a 150-metre (490-feet) cross towering over it.

READ MORE: What you need to know about Spain's new government's vow to exhume Franco Built by Franco's regime between 1940 and 1959 — in part by the forced labour of political prisoners — the monument holds the remains of around 37,000 dead from both sides of the civil war, which was triggered by Franco's rebellion against an elected Republican government.

It looms over a giant esplanade and a basilica watched over by Benedictine monks where the late dictator rests, fresh flowers laid on his tomb every day.

Franco, whose Nationalist forces defeated the Republicans in the war, dedicated the site to “all the fallen” of the conflict in an attempt at reconciliation but critics charge it is unacceptable to give such ostentatious  recognition to a brutal dictator.

They point out that the families of the Republicans were never told about their transfer to the valley.

Visitor numbers to the site have soared since the government announced its plans. Spain's national heritage agency that runs the monument said 38,269 people visited in July compared to 23,135 in June.

READ ALSO: Rush to visit Franco's tomb before his remains are moved People make the fascist salute in a July protest against the removal of Franco's remains from The Valley of Fallen. Photo: AFP

Sanchez's minority government argues Franco's exhumation was backed by a non-binding motion approved last year in parliament which was ignored by the former conservative government.

The decree is now expected to pass in parliament as it is supported by far-left party Podemos as well as Catalan separatist parties and a Basque nationalist party.

But it is fiercely opposed by Franco's descendants who are refusing to take his remains to the family sepulchral vault in Galicia in northwestern Spain, and the main opposition conservative Popular Party (PP) which has warned it will challenge the decree in court.

“It is more important (to Sanchez) to revive the ghosts of the past than to try to seduce people with the future. He is more interested in opening the wounds of our worst past than in concentrating on our better present,” the PP's new leader, Pablo Casado, told reporters on Thursday.

Aside from removing Franco's remains, the government announced last month that it wants to establish a truth commission on wrongdoings during the civil war and dictatorship, and annul politically motivated Franco-era court decisions.