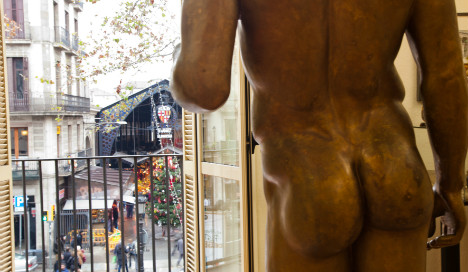 The third most visited city in Europe has historic architecture, Mediterranean beaches and a vibrant cosmopolitan culture.

It is the city of Gaudí’s Sagrada Família and Park Güell, of international congresses and music festivals, world class football and of course,some of the best of the best cuisine in Europe.

But for those of you who want to dig deeper beyond the weekend tourist bucket list, Barcelona resident Francesca Hector shares her favourite secret places. If a museum or gallery represents the institutionalization and commercialization of art, then an art café is a space where creativity can breathe and be breathed. There are several cafés around Barcelona whose walls allow artists to share the fruits of their inspiration, and where you’ll also find well prepared coffees, fresh cakes and savory dishes. Favourites include Guzzo (Plaça Comercial, 10) in the Born, who also organise excellent jazz, acoustic and soulful DJ sessions. The eclectic Venus (Carrer d'Avinyó, 25) is a snapshot of the Gothic Quarter. Comfortable seats and large tables add to the bohemian ambience of the Cosmo Café (Carrer Enric Granados, 3). A garden full of cats

Just a stone’s throw from La Rambla, El Jardinet dels Gats is home to dozens of beautiful rescued kitties who are waiting to be adopted. Most passers-by miss what’s going on behind the tall wire fence – cats curled up asleep on the sunny spots of benches, stretching to scratch a tree, and playing in the tunnels and boxes left for their amusement. Next time you’re near C/ Nou de la Rambla 14, whisper them a mieow. Park Guinardó is an oasis of calm. Its tall pine trees cast their shadow on the many locals who come to walk their dogs or enjoy a stroll. The views are spectacular, especially from the very top of the turó, or hill. This was once a shanty district whose houses reached up the sides of the rural hillside. Tiled floors remain, and you can spot the occasional frame of a toilet or outline of a doorway. It was also an anti-aircraft base during the Spanish Civil War. The bunkers are closed off, but you can still see the outline of the old gun turrets set deep in the stone. One of Barcelona’s most innovative experimental theatre spaces, in just over a year the Sala Hiroshima has established a reputation for some of the most interesting performances in town. International groups and local artists are carefully chosen to participate in a programme that spans contemporary dance to physical theatre and multimedia performances. The adjoining bar is also an independent establishment where you can meet with friends for a drink and some tapas. (C/ Vila I Vila 67)

Has anyone heard of the Palau Macaya? After living for more than a decade in Barcelona I stumbled upon this magnificent building recently and was truly blown away! This elegant Modernist palace is now owned by the Caixa Foundation, which has restored it to gleaming perfection. Free cinema sessions and art exhibitions take place regularly, and there is a library which has an extensive collection of historic books. Passeig Sant Joan 108. Vintage and second hand markets have become a big deal in Barcelona; barely a weekend goes by without at least one gathering for bargain-hunters. Els Encants Vells is the biggest permanent market in town, located next to Glòries metro. One man’s garbage is another man’s treasure, as Flea Market Bcn remind us with their monthly pop-up events. Other markets to keep an eye out for are the Palo Alto Market, with tasty street food, and the Barcelona Vintage Market which takes place at the Estación de França.

Hunt down some Boqueria bargains Barcelona’s Boqueria Market (La Rambla 91) is no secret, it’s surely the most visited food market off one of the most populated streets in the world. What you might not know, however, is that you’ll usually find better prices at the back of the market. Stalls selling fresh juices and cut fruit portions need to clear their stock at the end of every day, and you can snap up some delicious 2-for-1 or often 3-for-1 deals if you go around closing time at 8:30pm.

When in Barcelona, seek out the Romans Roman Barcelona was a walled city in the area we now know as the Gothic District, or Old Town. Plaça Sant Jaume has been an epicenter for civic life since Roman times, when it used to be the Forum. One of the best preserved relics of that bygone era is the three remaining columns of the nearby Temple of Augustus which stand tall at Carrer Paradis 3.

Stop for a bite at Mercat Princesa Now this one’s a real jewel of a find! Tucked away in the back streets of the Born district there’s a wooden door which opens out to a delightful array of cafés, bars and world food stalls. The rustic interior of Mercat Princesa gives the sense of having stepped into a cavern of delights, a first impression which so far has been confirmed by everything we’ve tasted, from baked potatoes to tapas and sushi. Carrer dels Flassaders, 21.

Francesca Hector is a freelance writer living in Barcelona who enjoys diving into details and zooming out to see the bigger picture. She writes for Apartment Barcelona, a leading apartment rental agency in Barcelona, and is a regular contributer to their blog.