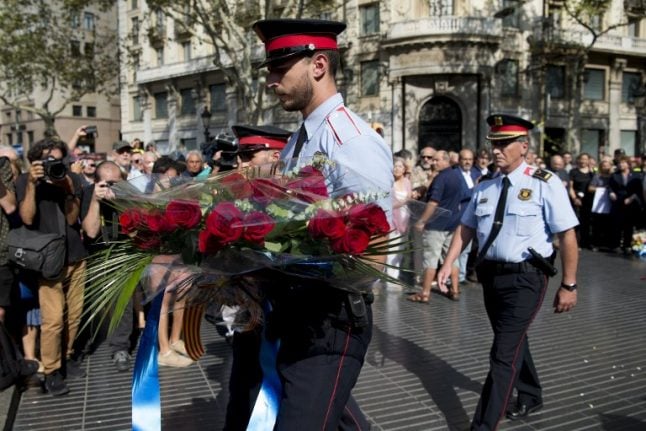 Fourteen people died — including two young children aged three and seven — and over 100 were injured in the Barcelona van attack on the city's most famous street, Las Ramblas, on August 17, 2017.

During his escape, the 22-year-old Moroccan attacker also stabbed to death a young man before stealing his car.

Hours later, a car carrying five of his accomplices sped into Cambrils some 120 kilometres (75 miles) south.

The king, his wife, Queen Letizia, and Prime Minister Pedro Sanchez will on Friday join families of the victims in Barcelona for the commemoration at the Plaza Catalunya, near Las Ramblas.

“We have not given up on our values   and beliefs, which one year later are stronger than ever,” Barcelona mayor Ada Colau said on the eve of the anniversary, her eyes welling with tears as she read out the names of the 16 victims.

“We are, and we will be a city of peace, a courageous city that fights terrorism with love,” she added.

Before the ceremony, which will begin at 10:30 am (0830 GMT) and not include speeches, flowers will be laid on a pavement mosaic in the centre of Las Ramblas designed by Barcelona-born artist Joan Miro  — the spot where the van came to a stop.

'Thought I was dying' “I don't remember anything about the attacker, I only saw him stabbing me. He left the knife stuck in my face, it plunged 15 centimetres (six inches) into my head…. I honestly thought I was dying,” said Ruben Guinazu, 55, one of the victims of the Cambrils attack.

The Islamic State group claimed responsibility for the attacks but investigators have not found any evidence that the cell of young men who carried them out had any international links.

Instead investigators believe an imam in the mountain town of Ripoll located about 100 kilometres north of Barcelona indoctrinated a group of youths of Moroccan origin.

READ ALSO: A year on, suspicion and silence in Spain jihadists' hometown

The cell the imam formed was making bombs at an abandoned house some 200 kilometres from Barcelona which police believe they intended to use to strike the Sagrada Familia basilica in Barcelona, the city Camp Nou stadium or the Eiffel Tower in Paris.

But the explosives they were using accidentally went off on August 16th, prompting the cell to improvise a vehicle attack similar to the ones carried out in other cities such as Nice and London. People walks past flowers from a tribute in memory of the victims on the Ramblas boulevard in Barcelona. Photo: AFP

The attacks shook Spain although they soon became overshadowed by tensions over Catalonia's independence push in October.

A year later these tensions are resurfacing due to the king's presence at the ceremony in Barcelona, the capital of the Catalonia region.

The king — who adopted a hard line stance against Catalonia's separatist drive — was jeered by some separatists at a protest in Barcelona against the attacks.

This time around separatist organisations have not called for protests against the king but are staging their own ceremonies in honour of the victims to avoid him.

Families of the victims have asked for the authorities to set aside political disagreements on the anniversary.