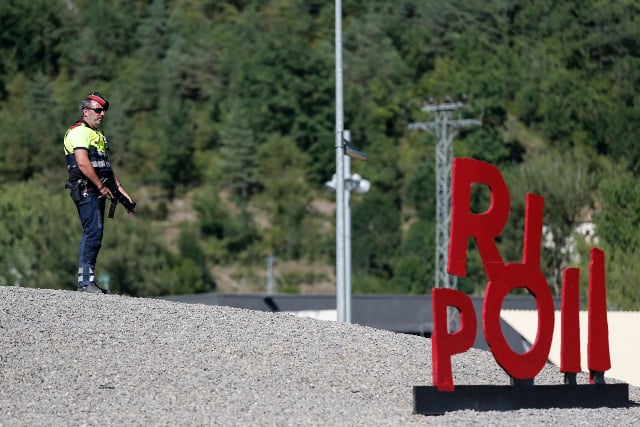 A police officer in Ripoll around the time of the 2017 Barcelona attacks. Photo: Pau Barrena/AFP

The town in northeastern Spain is struggling to return to normal after local youngsters cut short the lives of 16 people.

It's a tough task for a place with a population of 10,600 where everyone knows each other.

A banner saying “We condemn the violence” hangs on the facade of the school where the alleged jihadists studied, the only visible trace of what happened last summer.

“We're trying to lead a normal life, but it's difficult,” says Juani Pujol, 58, one of the few locals willing to talk.

“Even if we say there are no arguments, these things affect you and you become more racist and wary than normal.”

Nestled at the foot of the Pyrenees mountain range, Ripoll was until last year known mainly for its beautiful Benedictine monastery.

But all that changed when it became the centre of international media attention after it emerged that the cell behind the double attacks in Barcelona and the seaside resort of Cambrils on August 17th and 18th, 2017, had started there.

For months, a group of friends, among them four pairs of brothers, were captivated by the imam of a mosque in Ripoll who convinced them to plot large-scale attacks.

But when an abandoned house where they were making explosives accidentally blew up on August 16th, they were forced to improvise.

So it was one of them who ploughed a van into the bustling La Rambla boulevard in Barcelona while others drove a car into the seaside promenade in Cambrils, 120 kilometres (75 miles) south of the Catalan capital.

Eight of them died, six killed by police and two others in the explosion — including the imam.

Another three are in jail.

“I knew them… they were never violent,” says Wafa Marsi, a former municipal mediator who had helped welcome their immigrant families in Ripoll.

“It's very easy for society to call them terrorists, Islamists, jihadists. But for us they have a name: they're Younes, they're Moussa, they're Hussa…

“It's only normal that we want to brush all that crap under the carpet.”

After months overshadowed by Catalonia's attempt to secede from Spain last autumn, memories are now re-surfacing as the one-year anniversary of the attacks approaches, and a judge allows part of the investigation to be made public.

Last week, the media was awash with photos of the young men preparing explosives or smiling as they tried on suicide vests, and videos where they joked about the harm they would cause.

And in Ripoll the nagging question came back: How could men 17 to 28 years old, who grew up here, with friends who weren't Muslims, belonging to sports clubs, working and speaking fluent Catalan, change so much?

The investigation points to imam Abdelbaki Es Satty, who had a criminal record for drug trafficking in Spain, as the one who entranced the youngsters.

And being integrated in society doesn't necessarily mean a thing, he adds.

“Now we don't pay so much attention to whether they are integrated in society, but more if they feel they belong in society,” Oliva explains, speaking generally of police investigations involving first- or second-generation immigrants.

Marsi says the young men may not have felt Spanish or Moroccan, referring to their heritage.

“This lack of identity is the weak point that the recruiter took advantage of.”

Smoking in front of the Esperanza bar, the meeting place of the 500-strong Muslim community in Ripoll, Mohamed curses the imam between cigarette puffs.

“He brainwashed them and has really messed things up,” says the 48-year-old painter, who declined to give his surname.

“There are people who would say 'hi' before and who now look at you badly. Everyone knows me and knows I have nothing to do with this, but I'm Moroccan and from Ripoll, and that makes you suspicious.”

Since the attacks, the town is striving not to shatter the friendliness that existed towards immigrants in general and the youngsters' families.

But under the surface some hostility lies.

“They can't keep living here after what happened. We give them everything and they pay us back like that?”, says the owner of a shop, who refuses to be named.

The town hall has implemented a plan to try to avoid xenophobic attitudes and get the 1,100 foreigners to participate in municipal activities so that they feel they belong.

Mayor Jordi Munell says there was obviously “some element” lacking “for them not to feel like they were members of society”.

“And it's that feeling of belonging that we're going to delve into.”