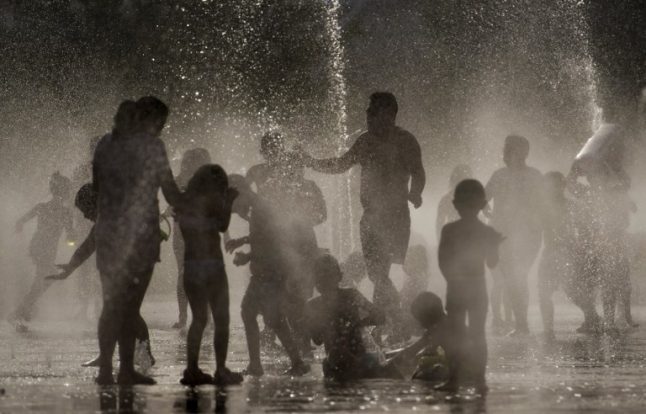 In southern Spain, the heat continued to pound down with four southern provinces- Córdoba, Huelva, Sevilla and Badajoz- expected to reach 45 C.

The heat has already claimed the lives of three people this week.

A middle-aged man in Barcelona, whom media said appeared to be homeless, was found collapsed on a street Friday and taken to hospital where he later died of heatstroke, Catalonia's civil protection agency said in a statement.

Two other men — a roadworker in his 40s and a 78-year-old pensioner tending to his vegetable garden — also died from heatstroke this week.

The heatwave was expected to reach its peak on Saturday, said Paula Leitao of the Portuguese Institute for Sea and Atmosphere (IPMA), with the city of Setubal not far from Lisbon due to reach highs of 46 C during the day.

By way of comparison, this is not far off the 48 C expected in California's notoriously parched and scorching Death Valley, one of the hottest places on earth, according to US forecaster AccuWeather. This comes a day after 16 weather stations in the country registered record temperatures including in Alcacer do Sal near Setubal, where the heat climbed to 45.9 C.

Authorities in Lisbon have closed playgrounds and called on people to avoid picnics and outdoor activities.

Refuges for homeless people have also opened earlier in the day to allow them to take shelter from the crushing heat.

In Vienna, police dogs due to patrol a beach volleyball tournament were fitted with special little shoes.

Police said that even if temperatures were not excruciatingly hot, reaching just 34 C on Saturday, the dogs will have to spend hours walking on surfaces exposed to the sun that could easily go over 50 C, hence the shoes.

In the Netherlands, authorities had closed certain sections of highways where the heat had melted the asphalt.

The central city of Zwolle, meanwhile, had started cutting the branches of some 100 poplar trees.

Dutch public television NOS explained that branches could break due to the heat and create danger for drivers or passers-by.

A total of four nuclear reactors in France have been closed due to the heatwave.

French power company EDF said the measures were taken to avoid raising too high the temperature of rivers where nuclear plants draw water to cool down reactors and then pour it back in.

Saturday was also the summer's busiest day on the roads, as July holiday-makers returned home and those who vacation in August departed for their month of farniente.

By late morning, 670 kilometres (416 miles) of traffic jams had been reported, according to France's traffic authorities, as the heat pounded down on the asphalt.

Italy too faced the summer's busiest day on the roads for the same reason as France.

Holiday-makers were expected to face adverse weather conditions wherever they went.

In the north, the scorching heat beat down on cars while violent hailstorms were expected in the afternoon in the south.