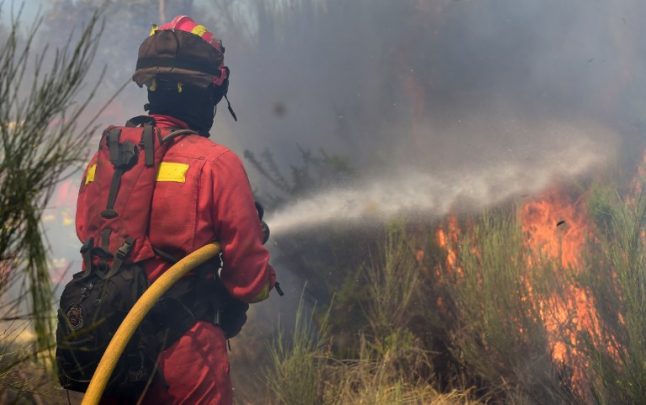 File photo of a firefighter battling a forest fire in Spain. Photo: AFP

More than 100 firefighters, backed by seven water-dropping aircraft and troops from a local military base, were tackling the blaze at Punta Camarinal near Tarifa in the province of Cadiz, the firefighting service in Andalusia said in Twitter message.

The fire threatened the Estrecho natural park, which is home to oak, cork and wild olive trees, as well as birdlife, such as white storks, vultures and falcons.

The park takes in Bolonia beach, which is regularly included on lists of Spain's best beaches because of its fine white sand and crystal clear waters.

Firefighters said wind gusts of up to 55 kilometres (35 miles) per hour were making it hard to contain the flames.

Like much of Spain, Cadiz is on high alert for forest fires because of a heatwave pushing temperatures past 40 degrees Celsius (104 Fahrenheit).

Spain's meteorological office, Aemet, said the hot spell would stretch from Wednesday to at least Sunday as a mass of hot air moves up from Africa.

In 2008, a wildfire destroyed around 500 hectares (1,200 acres) of land in the Estrecho natural park and forced the evacuation of around 1,000 people.