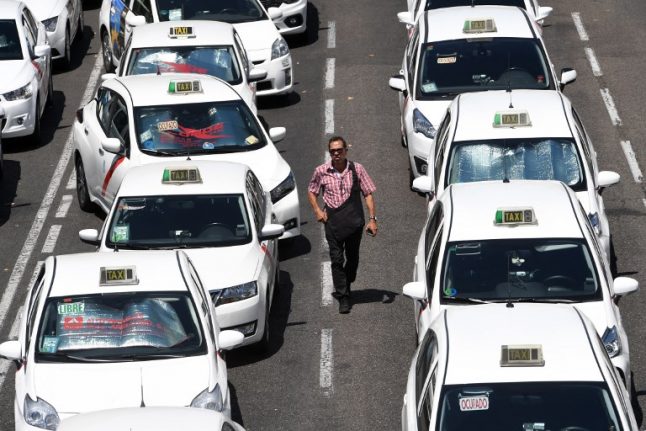 Taxis blockade Madrid's Castellana during the strike, which has now been called off. Photo: AFP

The strike began in Barcelona on Wednesday last week and spread to Madrid at the weekend as drivers demanded action against what they believed was poor enforcement of regulations on VTCs (tourism vehicles with chauffeur).

On Monday, it spread even further to cities across the country, with taxi drivers blocking main roads and surrounding airports and train stations. The strike mirrors other similar work stoppages in European countries, as taxi drivers across the continent complain ride hailing competitors are threatening their livelihoods, arguing for instance their licences are much more expensive than those for VTCs.

Spanish taxi federations want the authorities to strictly enforce legislation under which there should be 30 traditional taxis for each VTC.

The taxi strike committee said in a statement that it had called off the work stoppage across Spain after the government said it would allow the country's regional governments to regulate VTC licences.

But it warned that taxi drivers would “remain vigilante” and “return to the streets” if this move does not lead to tighter controls on ride-hailing services.

Shops and restaurants in Madrid and Barcelona complained earlier Wednesday of a 15 to 30 percent drop in sales due to the taxi strike.

In Barcelona, a major tourist magnet, sales at shops and restaurants in the centre were estimated to have dropped between 15 and 25 percent, said Gabriel Jene, head of Barcelona Oberta, which represents businesses located on the main, central thoroughfares of the city.

To make matters worse, the taxi strike is but the culmination of a tough year for the seaside city, which last August suffered a deadly terror attack followed closely by a failed secession bid in October that triggered many large — if peaceful — protests.

“We've been experiencing a year of 'permanent conflict',” said Salva Vendrell, vice-president of RETAILcat, a group that represents shops and restaurants in 10 Catalan cities including Barcelona.

“It's hurting the image of the city,” he told AFP, adding his grouping estimates sales have dropped an average of 30 percent in Barcelona this year due to the various events, particularly in central, touristy areas.

In Madrid, meanwhile, Luis Pacheco of the COCEM trade grouping estimated sales had dropped between 20 and 30 percent due to the strike as well as unrelated public works on the main Gran Via thoroughfare.

VTC drivers have in turn criticised their traditional taxi peers, charging some have been attacked.

The central government's office in Madrid, which met with members of Unauto, the grouping that represents VTCs, said police were “probing more than 60 complaints for physical assault, damage to vehicles, coercion and public disorder.”