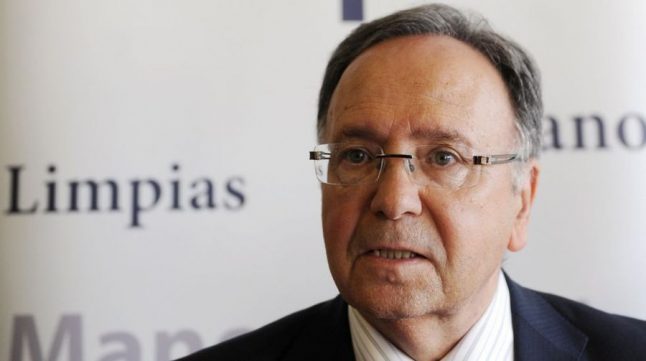 Miguel Bernad, the founder of "Manos Limpias" is accused of extortion. Photo: AFP

Miguel Bernad, the founder of “Manos Limpias” (Clean Hands), and Luis Pineda, who created the Ausbanc association that defends bank users, are accused of extortion, fraud and belonging to a criminal organisation, said the National Court, which deals with major corruption cases.

The two groups are suspected of having sought bribes from firms, institutions and individuals in exchange for withdrawing criminal cases they had filed against them.

Manos Limpias, modelled on and named after the Clean Hands movement launched by Italian prosecutors in the 1990s, filed hundred of cases after it was founded by Bernad in 1995.

Its most prominent case was the tax evasion charges brought against Princess Cristina, King Felipe VI's younger sister, in a corruption scandal centred on her husband's business dealings.

A lawyer for Princess Cristina claimed that Manos Limpias had asked for money to drop the accusations, which her defence team refused.

She was eventually cleared of all charges in a high-profile trial in 2016, but her husband Inaki Urdangarin was sentenced to nearly six years in jail.

Virginia Lopez, the lawyer who represented Manos Limpias in the case, will also stand trial for alleged extortion as will seven other people accused of being part of the extortion ring. Virginia Lopez, the lawyer for Manos Limpias, led the case against Princess Cristina and her husband in Palma. Photo: AFP

Prosecutors are asking for more than 118 years of jail for Pineda, singled out as the leader of the ring, more than 24 years for Bernad and close to 12 years for Lopez.