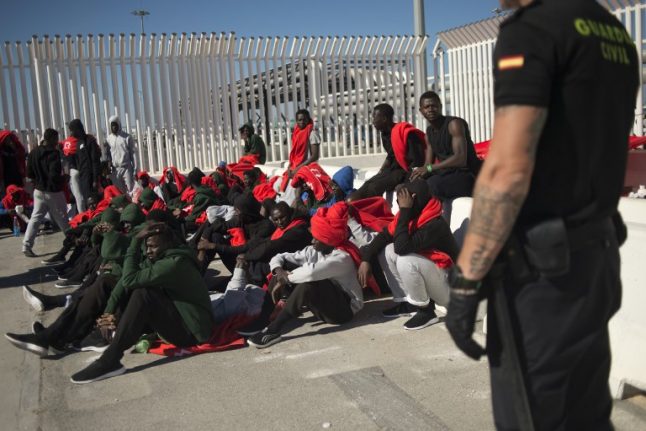 The 18-year-old Cameroonian says he gets just two meals a day — milk and a biscuit for breakfast and juice and a sandwich for dinner — as he waits to be identified by police and allowed to leave the port, one of Europe's biggest.

“As you can see it is difficult. It is so hot,” he told AFP on Monday as he pointed to his makeshift bed, which was sheltered from the blazing sun by a Red Cross blanket he had tied between a fence and a concrete road barrier. “I did not expect to stay here for a long time like this. I am shocked. I can't believe it,” said Alban, who lived in Morocco for two years before making the crossing to Spain, adding that he had expected a more efficient
reception in Europe.

He is part of a surge in the number of migrants arriving by sea on Spain's southern shores from North Africa that is stretching the country's security forces and safety net.

Spain has overtaken Italy as the preferred destination for migrant arrivals in Europe this year as a crackdown by Libyan authorities has made it more difficult for them to reach Italian shores.

Close to 23,000 people have arrived by sea so far this year with 307 dying in the attempt, according to the International Organization for Migration – more than during all of last year.

Just since Friday more than 1,500 migrants have landed in the southern province of Cadiz in Andalucia, with the majority of the new arrivals funnelling through Algeciras.

Dozens of migrants were filmed landing on a beach at Tarifa near Algeciras on Saturday before sprinting into woodland as stunned sunbathers — some of them naked — looked on, in videos that went viral on social media.

With police stations and makeshift emergency shelters set up in sports centres in Cadiz full, many rescued migrants have been forced to sleep inside an orange rescue boat docked in the port of Algeciras, or on the pavement beside it. During a fact-finding visit to Algeciras on Saturday, Interior Minister Fernando Grande-Marlaska denied there was a “collapse” in the system to receive migrants, saying the situation is “absolutely under control and controllable”.

But police and charities that work with migrants say the surge in arrivals is exposing Spain's response as unplanned, underfunded and understaffed.

“The number of migrant arrivals is very significant, as is the lack of means to deal with it,” the representative of the Cadiz branch of the United Police Union (SUP), Carmen Velayos, told AFP.

There are not enough officers to process migrants within 72 hours of their arrival as required by law,  even though agents have been pulled from other tasks or in some cases worked every day for the past month, she added.

In a sign that police are struggling to control the situation, 62 migrants escaped on Sunday from a warehouse which has been turned into a temporary shelter in the port of Barbate in Cadiz.

The authorities have not had not enough blankets, mattresses and even food for the migrants who arrived in recent days, said Ana Rosado, an activist with the Andalusian Pro-Human Rights Association (APDHA) which provides aid to the new arrivals.

In some cases officials have asked local residents to donate water and basic food items for them, she added.

“They are completely overwhelmed,” Rosado said. The main opposition conservative Popular Party (PP) accuses Sanchez's approach of creating a “pull factor”, but the government points out that the rise in arrivals started more than a year ago.

It accuses the previous PP administration of not preparing for a predictable rise in migrant arrivals.

The interior minister said the government was working against the clock to open a new migrant reception centre near Algeciras with room for 600 people. Members of Spanish military emergency unit UME unloaded a truck-mounted crane on Monday to help set up the new centre scheduled to open later this week in the port of San Roque.

Words by AFP's Daniel Silva and photos by Jorge Guerrero