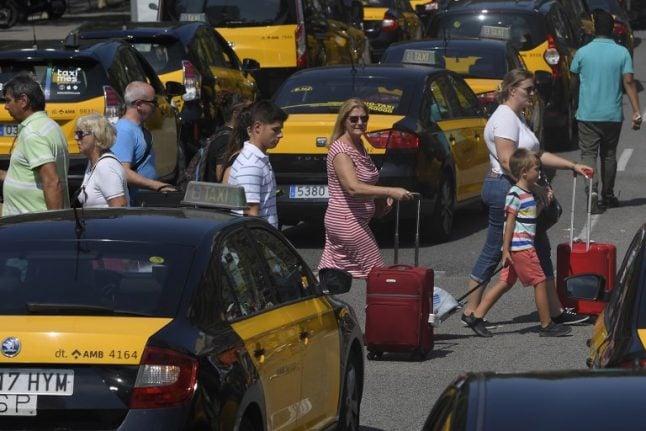 It started when taxis called a halt in Barcelona and has now spread to cities across Spain. Photo: AFP

The strike began in Barcelona last week and spread Saturday to Madrid as drivers demanded action from the government, which is due to meet their representatives at midday.

Strikes or partial stoppages have been called in Valencia in eastern Spain, Zaragoza and Bilbao in the north, and Seville in the south. The strike was sparked after the Spanish government appealed a ruling by the Barcelona authorities that limited the number of licences for Uber-style services.

Taxi driver federations want the authorities to strictly enforce the legislation under which there should be 30 traditional taxis for each VTC (Tourism Vehicle with Chauffeur).

In Barcelona, Spain's biggest tourist attraction, hundreds of black and yellow taxis parked for a third day on the Gran Via, one of the city's main roads.

Some drivers camped out there, sleeping on mattresses on the ground, in tents or in their taxis.

VTC drivers have in turn criticised their traditional taxi peers, charging that they were attacked in Barcelona last week.

“We sincerely hope that the state does not give in to blackmail from violent people,” said Unauto, the platform which represents Uber et Cabify.