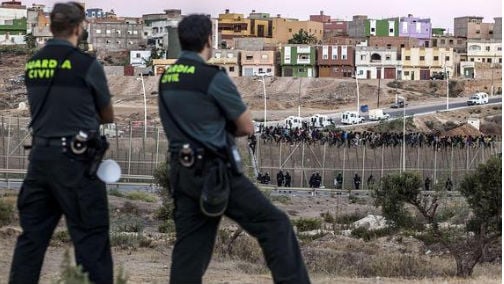 The scramble over the barrier is the biggest in Ceuta since February 2017, when more than 850 migrants entered the overseas territory over four days.

It comes as Spain becomes the number one destination for migrants crossing the Mediterranean by boat, surpassing Italy with 19,586 arrivals so far this year, according to the International Organization for Migration.

A statement from the Guardia Civil police force in Ceuta said “Some 800 migrants attempted to scale the perimeter fence, attempting to cut through the fence using shears at around 6.45 on Thursday morning.

“To prevent officers from approaching the area where the entry attempt was taking place, the migrants used violence including defensive material such as homemade shields and threw tubes and bottles containing excrement and quicklime. The used aerosol cans as flame throwers and sticks and stones as missiles,” the
statement continued. Some of the missiles recovered by officers during the crossing. Photo: Guardia Civil.
The Guardia Civil reported that 15 officers were wounded including five who suffered burns and had to be treated in hospital.
They said 602 people made it across the barriers.

Isabel Brasero, spokeswoman for the Red Cross, said they had to attend to 30 migrants with injuries, none serious.

Eleven of them were taken to hospital for stitches and possible fractures, she added.

She said that after they had climbed over the barrier, they ran to the centre that houses migrants once they arrive in Spanish territory.

Ceuta and Melilla, another Spanish territory on Morocco's northern border, have the EU's only land borders with Africa, which is why many migrants try to reach them.