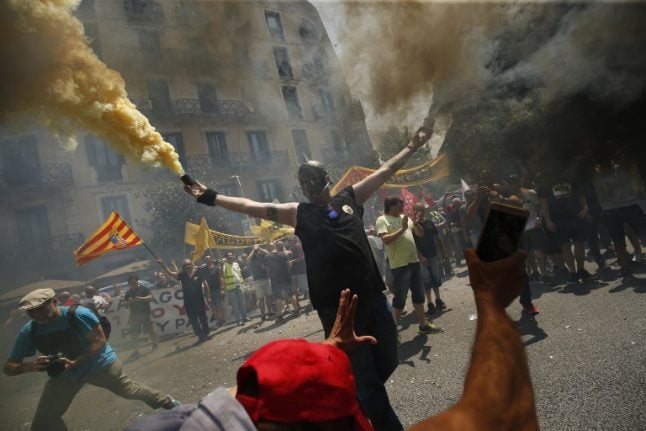 “Our priority is that drivers and travellers are as safe as possible and right now the city of Barcelona cannot offer that security,” Eduardo Martin, president of Unauto VTC, told AFP. “Given the nature of the assaults we have suffered in the past few hours the most prudent thing to do was stop offering our services.”

Hundreds of taxi drivers, some of them from other parts of Spain, protested in the centre of the Mediterranean seaside city, lighting firecrackers and flares. At the airport, meanwhile, where dozens of Ryanair flights had been cancelled due to a cabin crew strike, the taxi stand was empty.

According to a police spokeswoman, stones were thrown at the vehicles of Uber-style licensed private drivers, with some ending up with flat tyres.

Martin said at least two drivers had been taken to hospital.

One was beaten up while another had a substance thrown in his face that provoked light burns, he added.

“There are others suffering anxiety crises,” he said. A police spokeswoman said she knew of one incident in which protesters threw a “liquid” into the face of a Uber driver, “causing him irritation.”

The taxi sector called a 48-hour strike after the Spanish government appealed a ruling approved by Barcelona authorities that limited the number of VTC licences given to professional, non-taxi drivers. The ruling, which has been suspended pending a decision, stipulated that one VTC licence could be awarded for every 30 taxi licences in Barcelona.

READ ALSO: Driving in Spain: Everything you need to know about Operación Salida