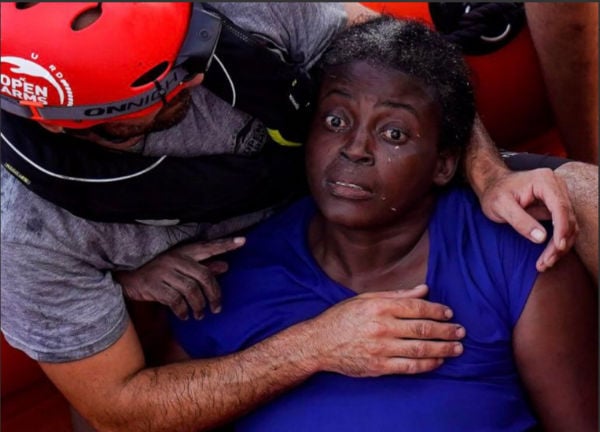 Proactiva Open Arms, whose two ships sail back and forth in the Mediterranean to save migrants in distress, said it had decided to return a day after saving the 40-year-old woman from Cameroon.

In a statement explaining why it had decided to go back to Spain, the NGO said authorities in Italy had offered to take in the woman but not the two bodies.

It added it feared “for the protection of the surviving woman and her complete freedom to testify” on what had happened at sea if they left her in Italy, which has taken a hardline stance towards migrant arrivals.

Proactiva accuses Libyan coastguards of having saved the rest of the migrants on board the dinghy but not the two women and the child, whom they say refused to board the rescue vessel and go back to Libya.

The NGO alleges that as a result, the coastguards left them and deflated the dinghy.

Italy's far-right interior minister Matteo Salvini, meanwhile, denounced “lies and insults (that) confirm that we are doing the right thing: reducing departures and landings means reducing deaths, and reducing the profits of those who speculate on illegal immigration.”

Italy and Malta are cracking down on NGO boats operating in the Mediterranean, sharply reining in their rescue efforts as they accuse them of encouraging migrants to make the perilous crossing.

Proactiva Open Arms is currently the only humanitarian aid group operating in the central Mediterranean zone, which migrants try to cross to reach Italy or Malta.

The woman who survived has identified herself as Josepha.

The rescue ship's medical team said she was in a stable condition but was traumatised and needed medical and psychological treatment “as soon as possible.”

The team also called for the quick transfer of the two bodies, as the Open Arms ship does not have refrigeration facilities to store bodies.