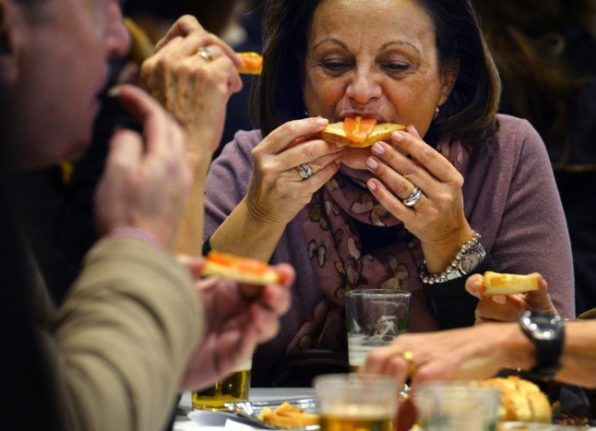 Don’t turn your nose up at your plate Callos. Offal that is super typical in Madrid and Asturias. Totally tasty and worth getting locally made. Just don’t ask what is in it. Photo:  Laura Hale

Never comment on how disgusting it appears no matter how unappetising you find it. Most likely the dish you have been served is a source of regional pride. So if you really can’t bring yourself to try Callos a la Madrileña (Madrid speciality of pig tripe and stomach lining), then insist you have already eaten.

READ MORE: These are the 17 absolute worst things about living in Spain The chances are they won’t have it or at best you will be given margarine instead. Instead, if you really want a moistener for your bread opt for olive oil. It’s local, plentiful and equally delicious. Chances are you’ll be in the only one in the restaurant.  Photo: Ulliana/Depositphotos

The biggest no-no when it comes to dining in Spain is getting the timing wrong. Attempting to eat your evening meal anytime before 9pm is considered just plain weird in Spain. Likewise don’t attempt to sit down for lunch before 2pm.

And don’t even think about rushing your meal Meals are social occasions to savour and enjoy. So no eating sandwiches at your desk, and prepare for some very strange looks if you unwrap a bocadillo while on the bus or the metro, or, heaven forbid, while you are actually strolling down the street. Remember jamón serrano is undoubtedly superior to Italian prosciutto, for every French cheese variety, there is a better one in Spain and if you find you prefer Scottish black pudding to morcilla, keep it to yourself. Don’t even mention Italian olive oil or French wine!

READ ALSO: This is what happened when a vegan ordered a meat-free meal on the Costa del Sol A request for a doggy bag will be met with a quizzical look and likely an enquiry into what kind of dog you have. The practice hasn’t really caught on yet in Spain.

Take it as it comes Do not dare to modify served food in any way. You might just get away with adding salt but asking for pepper or, perish the thought, ketchup will mark you out as a philistine. If it is home-cooked food, it may even be taken as an insult. Just eat up and compliment the cooking. (And the best way to do that is to ask for a second helping).
READ ALSO: 13 things foreigners do that make Spaniards feel really awkward

Don’t sit down to eat tapas The bitesize snacks are almost always eaten standing at the bar with a drink in hand. And when you have gobbled it up, whether it be a slice of tortilla or a couple of boiled prawns, it is still quite acceptable in traditional establishments to wipe your mouth with a paper serviette and then throw it on the floor.

Don’t ask the waiter to put ice in your wine Some foreigners like to add an ice cube to their glass of white wine on a hot summer’s day, but you’re likely to get some weird looks from staff and other customers if you ask for hielo (ice), as vino blanco (white wine) is always served chilled in Spain but never with ice. Spanish people do tip, but not always and never very much. It may be standard in Anglophone countries to add ten percent to your bill when served at a table but Spaniards as a whole are happy to leave a few coins, and only if they consider the service to be exemplary.
And last but not least…mind your Spanish