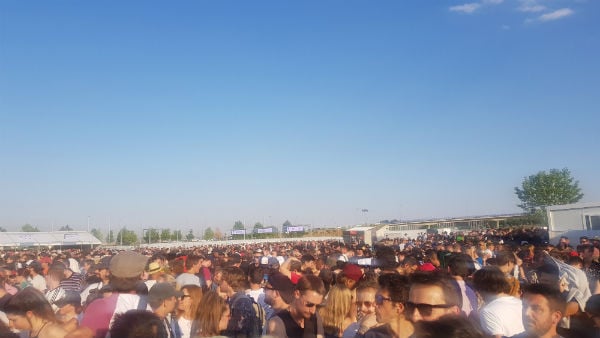 The festival was marred by queues, queues and more queues. Photo: Lee Roden.

The festival in Spain’s capital, which was billed as a rival to Barcelona’s Primavera, kicked off on Thursday at Valdebebas – IFEMA, a vast site in the north of Madrid.

The event sold out within days of tickets going on sale and organisers expected to host 80,000 people.

Consumer watchdog FACUA has demanded an explanation from organizers and called on Madrid City Hall to launch an investigation after festival goers experienced difficulties getting to the venue and hours-long queues to enter as well as a host of technical details.

Riot police had to be sent to the venue to control impatient crowds furious at the delays.

Transport to the venue:

Free shuttle buses were laid on for festival goers running between the concert grounds and Madrid’s Plaza Castilla. But the process was not without incident – one shuttle bus packed with festivalgoers crashed through a safety rail as it crossed a bridge on the M11 and was left hanging precariously over the void. No-one was injured apart from the driver himself.

Others decided to forgo public transport and pay the extra for an Uber car, tempted by the promise of VIP access in a collaboration between Uber and Mad Cool that promised:  “Uber customers would have their own dedicated entrance to beat the queues”.

Yet, on arrival no such VIP access was available and Uber users were forced to queue alongside everyone else.

The experience of many was summed up in one tweet by Jaime Diez: “I paid €31.44 to get to Mad Cool by Uber because you sent an email  saying I could avoid the entrance queues. I’ve spent more than 4 hours queuing outside and in. Thanks for robbing me!

Some complained of being charged €90 for a 10km journey.

A computer glitch meant that the wristbands tickets could not be scanned smoothly and in some cases it took up to ten minutes to process each one meaning that the queues quickly backed up. On the opening night, Thursday, some people stood in lines to enter the venue for more than 2.5 hours, in soaring temperatures well above 30C and without access to refreshments.

Those that had to collect wristbands because they couldn’t be sent out in advance were forced to wait even longer, sometimes missing perfomances of the bands they came to Mad Cool to see.

People complained that there was no shade or water provided to those queuing for access to the venue.

Debacle at the bars

Drinks and food were laid on at the venue at a series of chiringuito-style stalls but queues quickly formed there too. Then “a problem with the network” knocked out the credit-card machines meaning only those paying with cash could make a purchase.

Some of those that did buy drinks were shocked at the price: €10 for a ‘mini’ (which is actually 75ml) of beer. While others complained of a real risk of dehydration.

#massiveattack of dehydration at @madcoolfestival – one water tap for 80,000 people and tiny water bottles costing 2 euros (lid removed for you of course) #FridayFeeling

Others complained that security guards had confiscated their suncream at the entrance. Some suspected a deliberate ploy to force the purchase of bottles of the stuff inside.

@madcoofestival will you be letting people in by showing tickets today? I’m sunburned and won’t queue again. Also if I buy more sunblock (you disposed of mine yesterday) can I keep it this time? #MadCool2018

The scandal of empty VIP zones at the front of each stage was highlighted by Queen’s of the Stone Age frontman Josh Homme, who stopped the concert and threatened to walk off stage unless security opened up the area to all.

“That’s right, come on in,” he added. “It’s a Queens Of The Stone Age concert and you can do whatever you want to do… Let them in. Look at my face. Let them in or I will walk down there and let them all in.”

The big disappointment for many proved to be the cancellation by Massive Attack on Day 2 of the festival, apparently due to the sound bleed caused by Franz Ferdinand playing at the same time on an adjacent stage.

Added to the disappointment was the fact that fans were not informed of the cancellation and waited hours for the performance.

Massive Attack sort your ego out. Deciding not to go on due to (minor) sound bleeds (dick move but if you must), keeping silent on socials, is not respectable musicianship. Not great of #MadCool to take 1.5 hours to break the news to fans either.

“Unfortunately the band could not play at the scheduled time due to the sound interference of nearby stage that, due to the technical nature of the IEM monitors system (in-ear headphones) of the band itself, resulted in the concert not being able to go ahead.

“Attempts were made to resolve the situation during the next hour but in the end it was impossible.”
What was it really like?

Lee Roden, a reporter for The Local Sweden shared his experience of the event.

“We travelled all the way from Sweden excited to go to a festival with one of the best line-ups of the summer. I was quite surprised that they weren't going to allow punters to pick up wristbands until 5pm when the first band was due on at 18:00 but I figured they must have plenty of staff to make it possible to keep the entry lines flowing. I was wrong: we arrived off the Renfe with plenty of time to spare at around 5 and there was a line running all the way out the entrance, round the side then to the back of the festival site. We got in that and it moved just about quickly enough (around 45 minutes) to cope with the lack of shade and 30+ degree heat, but once we got to the front and through a security check where water was being confiscated, we realised that was just the first queue to go through security. After that there was a queue that was about twice as long to pick up the wristbands.

“We stood in that second queue for around two hours. There were barely any members of staff to be seen, and the ones who were present told us conflicting information about whether we needed to wait in line or not. I saw at least 6 people collapsed in the heat being attended to by medics. When we finally got to the front of the line, there were far too few people handing out the wristbands for the thousands of people waiting. It turned out the machines they were using weren't working too, so it took about eight attempts/ten minutes to scan and activate the wristbands, making the wait even worse.

“The fun didn't stop there: once we got into the festival site, it turned out that the entire payment system for debit cards was down, and there were no ATMs, so unless you had cash you couldn't buy water or food for the entire first night. I felt bad for the members of service staff who took the brunt of the flack from 80,000 tired, over-heated, hungry people who couldn't even get a drink. In the end we missed half of the bands we had bought tickets for/travelled to see — Tame Impala and Pearl Jam were amazing but the whole experience was soured by the chaos. To make matters worse the organizers didn't utter a word about it until 24 hours later, when they finally buckled under all the bad press they were getting and made a half-hearted apology:


I think it's safe to say that most people who experienced the first day (let alone Massive Attack cancelling without notice during the second) won't be coming back, which is a shame because this festival was so promising on paper

He summed it up in a tweet to the organizers: “People queuing for hours, without access to water, toilets and with some members of the team saying one thing and others, the opposite. This is a disgrace.” 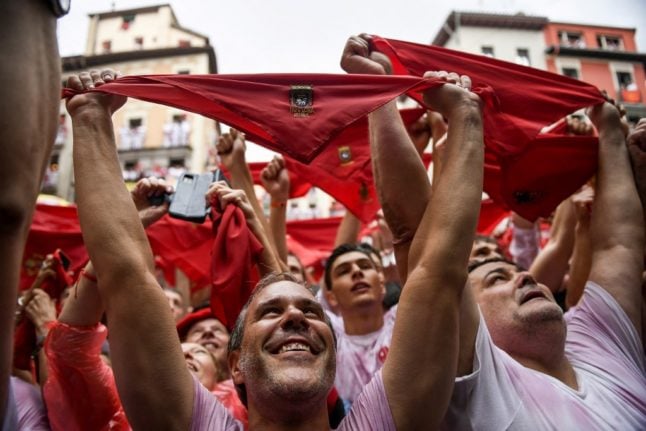