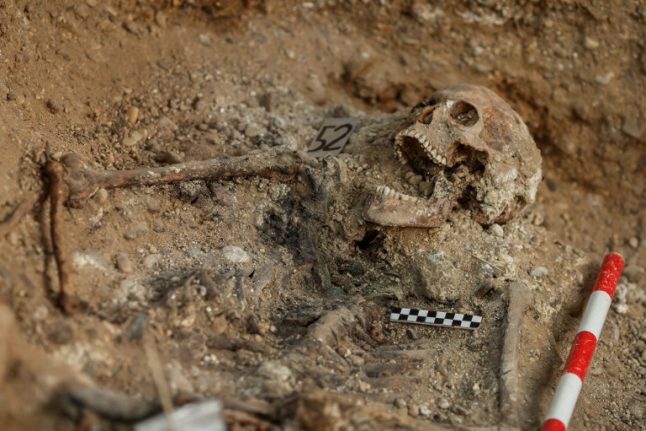 Human remains discovered during exhumation works done by the Association for the Recovery of Historical Memory of Valladolid. Photo: AFP

In a statement, the justice ministry said “historical memory” was one of its seven priorities under the new Socialist government, outlining a number of measures it would take in this sensitive area.

It said it would search for people who disappeared during the 1936-9 civil war and Francisco Franco's subsequent dictatorship, which only ended upon his death in 1975.

The justice ministry said it would make public the exhumations every year and number of people found.

An official census of the victims of the civil war and dictatorship would be created.

The ministry also plans to set up a “truth commission” and take away all symbols glorifying that period such as the street names of Franco generals.

After Franco's death, as the nation transitioned to democracy, authorities opted to draw a veil over the past for fear of further conflict. Franco watching the front during the Civil War. Photo: AFP

As a result, what happened is still largely suppressed, with Cambodia the only country to have more mass graves than Spain, according to Amnesty International.

Decades on, this means that no trials have been held, descendants of those who were killed by Franco's nationalists are still searching for the remains of their loved ones, and monuments honouring Franco's regime are scattered across Spain.

Chief among these is the Valley of the Fallen, a mammoth mausoleum to the late dictator just outside Madrid that was built in the 1940s and 50s largely by prisoners drawn from the forces Franco defeated in the civil war.

SEE ALSO: Spain begins to exhume bodies from Valley of the Fallen

He is buried there, as are more than 30,000 dead from both sides of the civil war, which was triggered by Franco's rebellion against an elected Republican government. Human remains discovered during exhumation works done by the Association for the Recovery of Historical Memory of Valladolid. Photo: AFP

In his book “The Spanish Holocaust”, historian Paul Preston estimates that 200,000 people died in combat during the civil war, and another 200,000 were murdered or executed — 150,000 of these at the hands of nationalists.

He calculates that 20,000 supporters of the fallen republic were executed after the war.