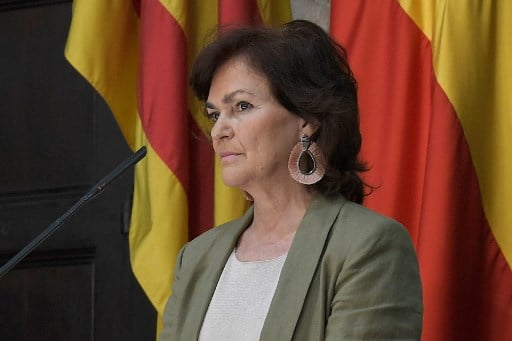 "We can't have a situation again like with the wolf pack case," said Spain's deputy PM. Photo: AFP

Spanish Equality Minister and deputy Prime Minister Carmen Calvo proposed the legal change on Tuesday, highlighting the need to avoid situations where the type of sexual offence committed is dependent on the judge’s interpretation of it.

“If a woman doesn’t say ‘yes’ expressly, everything else is a ‘no’”, she told journalists after the Equality Commission at Spain’s Congress of Deputies.

Her proposal is similar to that introduced by the Swedish government last March, whereby since July 1st having sex with someone without their explicit consent in Sweden is illegal.

Spanish society has been rocked in recent months by news of the gang rape of an 18-year-old woman at the famed bull run San Fermines festival.

Protesters took to the streets all across Spain in late June after a court ordered the release on bail of the accused, even though they were handed out nine year sentences.

The men, who called themselves “la manada” – “the wolf pack” – in a WhatsApp messaging group, had been accused of raping the woman at the entrance to an apartment building in Pamplona on July 7, 2016. “We can’t go through a similar situation where, through interpretation, what’s really a very serious crime against women isn’t considered as such,” Calvo is quoted as saying by Spanish leading daily El País.

Spain’s former ruling Popular Party approved a motion in 2017 that promised €200 million to the cause.