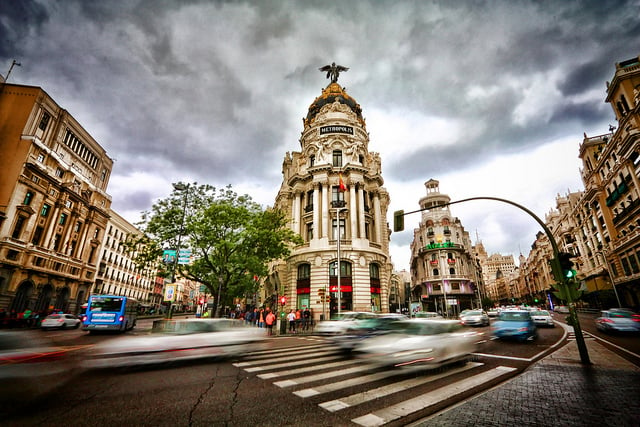 Any car that doesn’t meet these criteria won’t be able to gain access to the heart of the city. Photo: Wenjie Zhang/Flickr

Authorities in Spain’s capital have laid out a new set of traffic laws for central Madrid.

From November 1st 2018, access and parking in the city centre will be limited to residents of Madrid Centro and vehicles that have the environmental distinction given to them by Spain’s General Directorate of Traffic, in the form of a green eco sticker. Any car that doesn’t meet these criteria won’t be able to gain access to the heart of the city without facing steep fines.

According to El País, the new measures will affect roughly 20 percent of vehicles regularly driven and parked in central Madrid.

On Monday Madrid City Council presented its new Residency Priority Area (APR) for the Centro district, which includes the city's emblematic Gran Ví and neighbourhoods such as Letras, Cortes, Embajadores and Ópera that already had their own APRs.

The new APR encompasses most the of the previous residence priority areas. Source: Madrid Town Hall

The move aims to reduce carbon emission levels in Spain’s capital by 40 percent.

The space reserved for parking motorcycles with green eco stickers will be doubled to 5.4 linear kilometres.

Electric cars can circulate freely and Madrid City Council is considering extending this exemption to the eco cars and hybrids.

Authorities will give two to three months of leeway to drivers before imposing fines.

Residents of the APR will also receive 20 permits each month which they can give to visitors for them to gain access without the prospect of being fined.