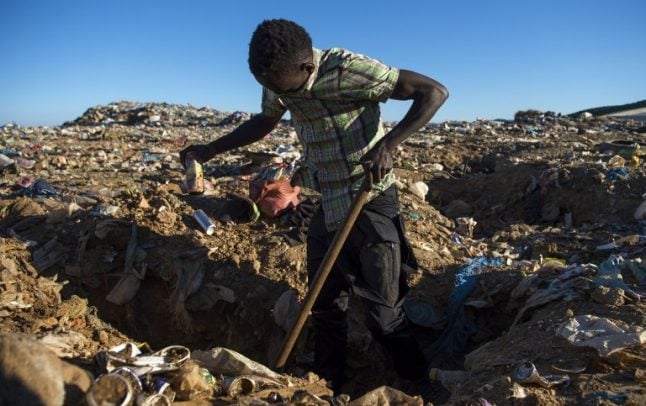 Unable to pay for the sea crossing, Youssouf and his friends will try to break through the barbed wire surrounding Ceuta. Photos: AFP

“My mother would be sick if she saw this,” said Youssouf, a 20-year-old from Guinea.

“We are going through a very difficult period. There's no work, we eat from bins, we don't have a choice.”

The foul-smelling rubbish dump is on the hills above Fnideq, a seaside city not far from where Morocco's King Mohammed VI spends his holidays.

The Spanish enclave of Ceuta sits on the horizon, the last stop on the African continent for thousands of migrants who spend months or years trying to reach Europe.

Youssouf has attempted to breach the Ceuta border numerous times during his five years in Morocco, after a lengthy journey which took him through Mali and Algeria.

“Each person here has their dreams, to study, work, play football. I dream of studying in Spain,” said Youssouf, while his companions dig up rubbish with a pickaxe.

“Doing this makes us feel ashamed. Our families don't know that we do this,” he said of their forage for food.

The migrants throw themselves onto a newly arrived rubbish truck, eager to stock up before the load gets buried in the dump.

Fintor discovers a theatre mask and puts it on, entertaining his friends.

Before trying his luck in Morocco, he spent months in Libya but “didn't have the means to pay for the crossing” to Europe. While the land route through Ceuta or the second Spanish enclave of Melilla is popular, many more migrants are increasingly reaching Spain by boat.

More than 22,000 people made the crossing in 2017, while so far this year more than 15,000 have reached Spain by sea, according to figures from the UN refugee agency.

The numbers are comparable to Italy, which this year has seen nearly 17,000 people arrive, while close to 14,000 have made it to Greece by sea, the UNHCR data show.

All options pose risks — of drowning, abuse by smugglers or even kidnapping.

A second gang kidnapped the young migrants and forced their families in Morocco to pay 500 euros for their release, the EU's law enforcement agency said.

The US State Department in a recent report found irregular migrants “highly vulnerable to trafficking in Morocco”, while noting a lack of proactive measure to prosecute traffickers or identify their victims.

Unable to pay for the sea crossing, Youssouf and his friends will try to break through the barbed wire surrounding Ceuta.

One hoping to follow in their footsteps is Aboubakar, who lives in a forest close to the Ceuta border fence.

“I got in three times and they made me leave, but I kept my cool,” said the 18-year-old Guinean, his scarred hands a testament to the failed attempts.

While he hides out and waits, Aboubakar has gone weeks without washing.

“It's not good for my health, but I've got no other options. I have to pass through here” and reach the other side, he said.