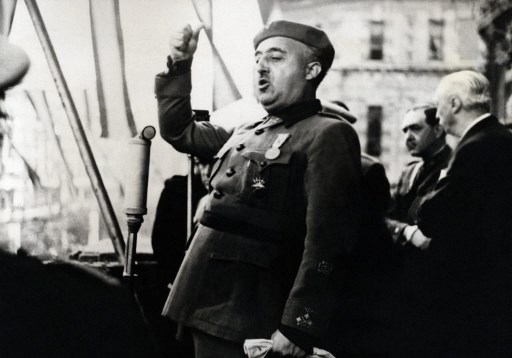 Franco, who ruled Spain from 1939 to November 1975 when he died, is buried in the valley just outside Madrid. Photo: AFP

One of 20,000 political prisoners forcibly conscripted to build what became known as the Valle de los Caidos (Valley of the Fallen), the 92-year-old said he was “delighted” that the government recently announced it would exhume Franco.

“In no European country has a similar tyrant been given recognition,” he told AFP in his country home near the city of Avila, not far from Madrid.

“It's an act of rationality,” added the historian who after his 1948 escape lived in exile in Argentina and the United States until 1976, months after Franco's death. Franco, who ruled Spain from 1939 to November 1975 when he died, is buried in the valley just outside Madrid in an imposing basilica carved into a mountain-face, with a 150-metre (490-feet) high cross that can be seen kilometres away towering over it.

Fresh flowers are laid on his tomb every day.

“A democratic regime cannot honour a dictatorship,” said Sanchez-Albornoz, whose father Claudio was a minister in Spain's Second Republic that was crushed by Franco and his supporters in the 1936-1939 civil war.

Nicolas was a young student when he was detained in the spring of 1948 for trying to restore an activist student organisation. He was sent to the valley where construction of the monument had been underway since 1940.

Franco had wanted it to be a place of “reconciliation” between Spaniards who had fought each other so bitterly during the war, filling it with the bodies of thousands of supporters and Republicans alike when it was finished in 1959.

It has since become a divisive symbol of a past that Spain still finds difficult to digest. Sanchez-Albornoz said he was luckier than many other prisoners — his type-writing skills saw him assigned to an office rather than manual forced labour.

At least 14 people died in the demanding construction work, although more may have passed away from related respiratory problems, he added.

There were more than 40 escape attempts, but Sanchez-Albornoz and his friend Manolo Lamana were the only ones who succeeded.

“All the rest fell” into the hands of the police, he said.

In his case, friends who lived in Paris dispatched a car and fake letters of safe-conduct so that they would be able to travel through Spain to the French border.

Sanchez-Albornoz and Lamana escaped on foot and were picked up several kilometres away by two young American tourists and a Spaniard.

The escape later inspired the 1998 Spanish film “The Brutal Years”.

During his time at the construction site, Sanchez-Albornoz said he discovered that forced conscription was fuelling a corruption network.

The state rented out each prisoner to a construction company for 10.5 pesetas a day, effectively doing business with its inmates.

But it went further than that. Half of the money earned by the state was officially destined for food for the prisoners.

In reality, said Sanchez-Albornoz, a lot of the food was taken by civil servants who resold it in Madrid on the black market, at a time of high poverty.

“I don't know if it was really lucrative, but it was definitely immoral,” he said.