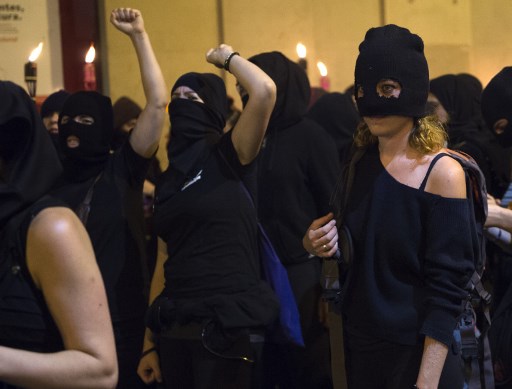 A year after a rape case that shook Spain to its core, laying bare the prevalence of sexual assaults at its most famed festival, Pamplona braces itself for a difficult start to this year’s celebrations.

Valencia-based feminist group Alerta Feminista has launched a social media campaign calling for women to wear black at July 6th chupinazo, the inauguration of the San Fermines, which sees Pamplona’s central square packed to the brim with partygoers.

The proposed wardrobe change, which counters the traditional white top and trousers worn at San Fermines, is planned as a means of protest for the lenient sentencing of five men accused of filming themselves raping an 18 year old at the 2016 festival.

But feminist groups from the region of Navarre argue that this outsider social media campaign “brushes aside” the work they’ve been doing and has a negative effect on what they’ve “been planning on the ground”.

According to Spanish daily El Español, local feminist collectives such as Bilgune Feminista, Emakume Internazionalistak, FARRUKAS and Women against Sexual Violence (la Plataforma de Mujeres contra la Violencia Sexista) have all voiced their disapproval of the ‘black clothes’ campaign, even though they have all been active in protesting the sentencing of the group known as the 'wolf pack'.

“These are our parties, we make the rules and we have to claim our place at them, taking the squares, laughing, dancing, planning, taking to the streets and the stages and overall having fun and enjoying the party as we want,” one group told El Español.

According to El Diario, some of these collectives have instead planned numerous protests with huge banners which will require a lot of (wo)manpower to be carried through the streets of Pamplona.

The slogans will call for self-defense and respect, encouraging women to not become the victims.

“If you were from here, you'd know that few women go to the chupinazo (it's very, very stifling and of the few that do go it's mainly foreigners who don't know what's going on),” local activist Itxaso Iturri is quoted as saying by El Diario.

“Therefore the results of your actions will be zero”.

Despite their complaints, local opposition hasn't been able to stop the “black clothes” campaign from going viral, with noted Spanish journalists Rosa Montero and Maruja Torres spreading the word, and the hashtag #MujeresDeLutoPorLaManada (#WomenInMouningBecauseOfThePack) also trending on Twitter.

It remains to be seen whether local women from Navarre will be spurred by Alerta Feminista’s campaign for the chupinazo, but one way or another it's clear that this year’s San Fermines have been overshadowed by a sexual abuse case that has tarnished one of Spain's best-loved traditions. In an attempt to reassure the thousands of tourists who come to party and take part in the hair-raising runs, the city in the northern Navarra region has this year dubbed itself “a city free of sexist assaults”.

During the San Fermin festival in 2016, five men who called themselves filmed themselves having sex with an 18-year-old woman.

She said they had gang raped her while they claimed she had consented in a case that sparked a powerful feminist wave of indignation across the country.

An April court decision to sentence them for “sexual abuse” rather than the more serious offence of “sexual assault”, a category that includes rape, pushed thousands of Spaniards onto the streets in anger.

Further fanning the flames, the five men were freed on bail just two weeks before the start of the festival, which means they could — in theory — return this year.

Incidents of sexual harassment are not new to the festival. In 2013, photos of women being groped by men shocked Spain.

Until then, “there was very backward thinking that justified men assaulting others under the effect of alcohol and in the party context”, Laura Berro, in charge of gender equality at Pamplona city hall, told AFP.

Since then, police and the authorities have at least been more alert to the issue, although the 2016 sexual abuse case is an indicator of the scale of the problem.

A phone number is available 24/7 for people to report sexual violence. Police then attempt to identify perpetrators using CCTV footage.

Since 2004, close to 95 percent of complaints for sexual violence during the festival have resulted in the perpetrator being identified, according to a study by Navarra University.

“Over the past two years, there has been a huge rise in complaints. Is that because there are more assaults and abuse? No. It's because they've been reported more,” says Paz Frances, who authored the study.

An information stand in a central square has also been set up to raise awareness among women taking part, and also to try to get wind of cases not reported to the police.

Before the start of the festival, hundreds of activists gathered Monday in Pamplona to pay homage to Nagore Laffage, a nurse killed 10 years ago during the bull run by a man after she refused to have sex with him.

“People have been more aware for several years now, because we've given voice to feminist ideas, and gradually, there are very important, very deep changes taking place,” Berro added.