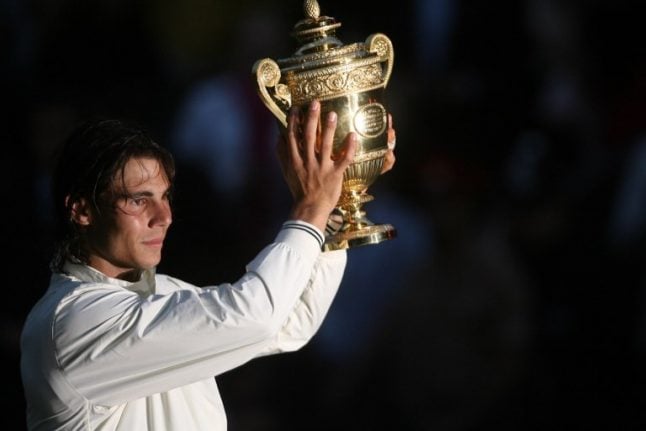 Spain's Rafael Nadal holds his trophy after defeating Switzerland's Roger Federer at the 2008 Wimbledon championships. PHOTO: LEWIS WHYLD / POOL / AFP
After losing to Federer in successive Wimbledon finals, Nadal finally got the better of the Swiss star in a thrilling 2008 clash many regard as the finest ever to grace the hallowed Centre Court.
Nadal's 6-4, 6-4, 6-7 (5/7), 6-7 (8/10), 9-7 victory was a defining moment for the Spaniard as it gave him a first Grand Slam crown away from his favoured clay at the French Open. The match marked the high point of a captivating rivalry between Nadal and Federer that played a huge role in tennis's resurgence as a multi-million-pound business.
For Nadal, the significance was far more personal. Aware of how important it was to legitimise himself by beating Federer at Wimbledon, Nadal went on to win on hard courts at the Australian and US Opens and emerged as one of the sport's all-time greats.
Nadal, now with 17 major titles on his CV, has arrived for next week's Wimbledon with the anniversary of his finest moment sparking happy memories.
“Of course in that moment, that final has been a very important step forward for me in my career,” he told a press conference at Wimbledon on Saturday. “I always have been very clear that it probably is one of the most emotional matches that I played in my career.”
“Yeah, everybody knows that for me to win here was one of my dreams,” Nadal continued. “After losing two finals, that final created a big impact in my tennis career. The personal satisfaction that tournament give to me is difficult to compare with other things. But, yes, it has been great.”
Nadal went onto win Wimbledon again in 2010 before a host of injury problems forced him to take a step back. He is back on top of the ATP rankings after winning an 11th French Open in June.
'I'm still here'
Asked what has changed since that golden evening against Federer, the 32-year-old said: “I'm older, more kilometres under my legs. In general terms, important things in life didn't change much. That's the real thing.
“In terms of tennis, of course I had to adapt a little bit my game during that period of time. Today I see that final like a long time ago. But the good thing is I still here. I am happy for that.”
Nadal has won three of the last five Grand Slams, taking the French Open two years in a row and lifting the US Open trophy in 2017. Despite his strong form at Wimbledon in the first half of his career, Nadal hasn't been past the last 16 since 2011 after a series of shock defeats against players outside the top 100.
Nadal admits it is difficult for his aching knees to transition from clay to grass, but insists he can make a strong challenge for Federer's title over the next fortnight.
“Expectations are always high. I am not here to play the tournament; I am here to try to have a good result,” said Nadal, who opens against Israel's Dudi Sela in the first round.
“But it's true this is one of these events that you arrive here and you really don't have the previous feeling of how you feel, how you are playing.
“It's nothing new; even when I won here, when I played five finals in a row. It's an event that you need to find your confidence during the tournament and during the practice the week before.
“For example, when I arrive to Roland Garros, I know more or less if I am playing well. I know where my chances are. In the US Open, little bit less, but still better than here.”
By AFP's Steven Griffiths