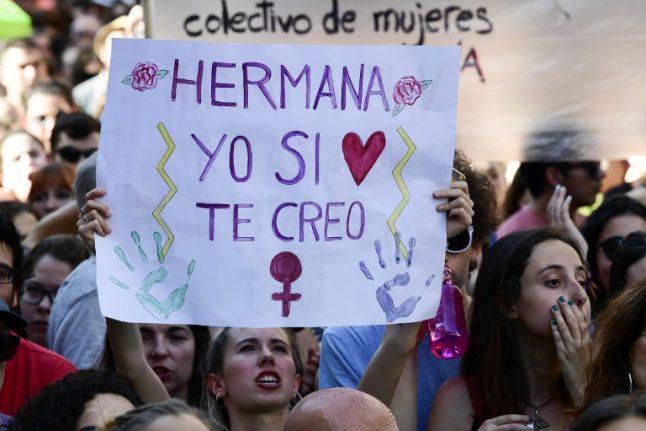 A poster saying "sister, yes, I believe you" at a recent protest. Photo: AFP

“Tell a friend, a relative, the police, in a tweet, do it as you wish, but tell it,” she wrote in an emotional letter read out on a popular Spanish television programme.

“Do not stay silent, because if you do, you are letting them win.

“Nobody has to go through this. No one has to regret drinking, talking to people at a party, going home alone or wearing a miniskirt.”

The five men, in their late twenties, were accused of gang-raping the victim, then aged 18, at Pamplona's bull-running festival in July 2016.

They videoed it on their smartphones and bragged about it within their WhatsApp group, calling themselves “The Pack”.

The men insist she consented and have only admitted to stealing her mobile phone.

In April, they were sentenced to nine years in jail for sexual abuse but acquitted of the more serious crime of sexual assault, which includes rape — a ruling that sparked nationwide protests.

More protests broke out last week when they were released on bail pending an appeal by prosecutors who say the sentence was too lenient. Thanks 'for believing me'

“Please, I just ask that no matter how much you think you will not be believed, you report it,” she said.

“You will think that you do not have the strength to fight, but you would be surprised to know the strength that human beings have.”

Her case sparked an outpouring of support in Spain, with people taking to social media with the slogan “I believe you”.

“I want to thank all the people who without knowing me… gave me voice when many tried to take it away from me,” she said.

“Thank you for not abandoning me, for believing me, sisters. Thanks for everything, from the bottom of my heart.

“It's really good to condemn incidents, but we all need to participate in change.

“Personally, if my case has stirred the conscience of one person or has given strength to another to fight, I am satisfied.”

The case has sparked calls to amend Spain's criminal code, which stipulates that evidence of violence or intimidation must exist for the offence of rape to be proved, a legal nuance which is often tough to establish.

In their ruling, the judges said: “It is indisputable that the plaintiff suddenly found herself in a narrow and hidden place, surrounded by five older, thick-bodied males who left her overwhelmed and unresponsive.”

But they decided there was no evidence of violence or intimidation.