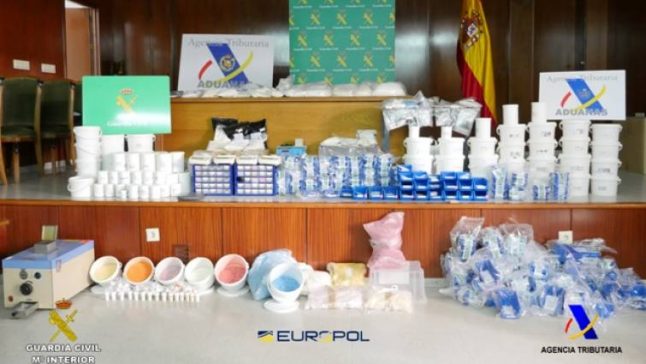 The drug bust, which saw police seize more than €4.5 million ($5.2 million) in virtual currencies, comes as experts warn that drug dealers are increasingly being paid in crypto currencies like bitcoin, which provide more anonymity.

Spanish police said in a statement they had seized more than 100 types of new psychoactive substances (NPS) in two laboratories in the southern province of Granada and Valencia in the east.

NPS are synthetic drugs that mimic the effects of the original drug, while avoiding being classified as illegal.

These included synthetic cannabis, amphetamines and opioids, “the latter having caused an extremely serious problem in developed countries like the United States”.

Such have been the number of deaths and addictions that the opioid crisis in the United States has been declared a national public health emergency.

Police said the designer drugs were produced in a laboratory in Amsterdam and the two labs in Spain, and sold in the deep web, a clandestine part of the internet.

Clients could pay with traditional money units but were encouraged to do so in virtual currencies, mainly bitcoin, they added.

Governments and financial institutions have urged global regulations of virtual currencies, which are not overseen by any central bank but by a community of users.

The anonymity of transactions has endeared them to libertarians but has sparked warnings they can be abused by criminals.

Earlier this year, billionaire Microsoft founder Bill Gates said they were being used for buying opioids and other drugs.

“It is a rare technology that has caused deaths in a fairly direct way,” he said in a Reddit conversation with online users.