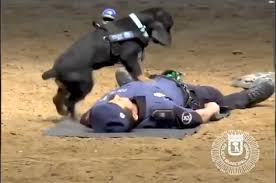 Poncho is not your average eight-year-old cocker spaniel.

For as well as being a valuable member of the canine sniffer unit at Madrid’s Municipal police force, she is also the only dog in the world that is known to have CPR skills.

The dog revealed his extraordinary skill during a display by police dogs in the Spanish capital last week.

In the video uploaded onto the force's official Twitter and Facebook accounts, the police dog is seen rushing to help an officer who has feigned collapse.

With a flashing blue police light strapped to his back, the black and tan Cocker Spaniel leapt onto the officer’s chest in a simulation of CPR.

After leaping and then thudding onto his chest repeatedly, the dog nestled his head into the fallen policeman’s neck, as if he was checking for a pulse.

He then repeated the procedure until the officer revived and the crowd roared with applause.

The video was shared with the message: “Heroic performance of Poncho, who did not hesitate for an instant to 'Save the Life' of the officer, practising #CRP in a magisterial way.

“The dog is the only being in the world that will love you more than you love Yourself – John Billings.”

The video went viral and was viewed more than 2.6 million times on Twitter alone.