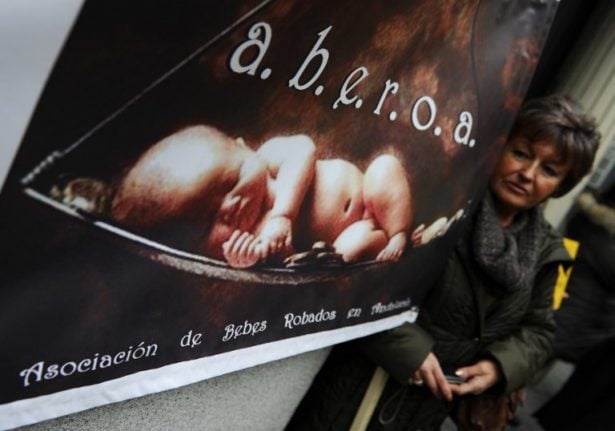 A woman poses next to a poster of the A.B.E.R.O.A association (Andalucian Stolen Babies Association) during a demonstration against baby trafficking on January, 2012. Photo: AFP

In a dark and often overlooked chapter of General Francisco Franco's 1939-75 dictatorship, the newborns of some left-wing opponents of the regime, or unmarried or poor couples, were removed from their mothers and adopted.

The practice began after Franco came to power after Spain's 1936-39 civil war pitting left-wing Republicans against conservative Nationalists loyal to the general who was seeking to purge Spain of Marxist influence.

Beginning in the 1950s it was expanded to remove new newborns from poor families as well as illegitimate babies.

The guiding principle was that the child would be better off raised by an affluent, conservative and devout Roman Catholic family.

The system — which allegedly involved a vast network of doctors, nurses, nuns and priests — outlived Franco's death in 1975 and carried on as an illegal baby trafficking network until 1987 when a new law regulating adoption was introduced. 'Good of the children'

Eduardo Vela, who worked as a gynaecologist at the now-defunct San Ramon clinic in Madrid, is accused of having in 1969 taken Ines Madrigal, now aged 49, from her biological mother, and given her to another woman who was falsely certified as her birth mother and who raised her.

He has been charged with falsifying official documents, illegal adoption, unlawful detention and certifying a non-existent birth.

The trial is scheduled to begin at 10 am (0800 GMT).   Campaigners say at least 2,000 other complaints for similar cases have been filed with the courts but up until now none has gone to trial in a country still coming to terms with the dictator's legacy.

Cases have been shelved due to a lack of evidence or because the statute of limitations had passed.

In 2013 an 87-year-old nun, who worked with Vela and allegedly controlled baby trafficking in Madrid, died before she was due to go on trial.

Vela was interviewed briefly by police after a magazine in 1982 published interviews with several women who claimed they had been cheated of their babies after giving birth at San Ramon but the probe went nowhere.

He told investigators in 2013 that as the director of the clinic he often signed papers without reading them.

Interviewed by the BBC in 2011, Vela grabbed a metal crucifix and said: “I have always acted in his name. Always for the good of the children and to protect the mothers.” Ines Madrigal poses in front of a banner reading “Stolen babies Madrid) during a demonstration against Spain's “stolen babies” scandal of the Franco era in Madrid in 2013. Photo: AFP

Madrigal, a railway worker who heads the Murcia branch of SOS Stolen Babies association, revived the case after reading an article in 2010 about the “stolen babies” affair which listed the San Ramon clinic where she was born as a focus for baby trafficking.

She became suspicious that she was one of his victims and began investigating.

While Madrigal said she did not expect Vela will provide answers about her origins when he appears in court, she told AFP she hoped his two-day trial would mark a turning point that leads the authorities to reopen investigations.

“That would be my biggest achievement. That a door opens here, a door of hope,” she told AFP.

Others are not as optimistic.

Cristina Monacha, who never saw her baby boy after being told he had died just days after giving birth in Madrid in 1984, said all Vela “has to do is invoke his right to remain silent and it's over”.

She said she was never shown her son's remains or his grave.

“I was told to stop crying, that I already had a 15-month-old daughter that needed me, that I was young and would have other children,” she recalled.