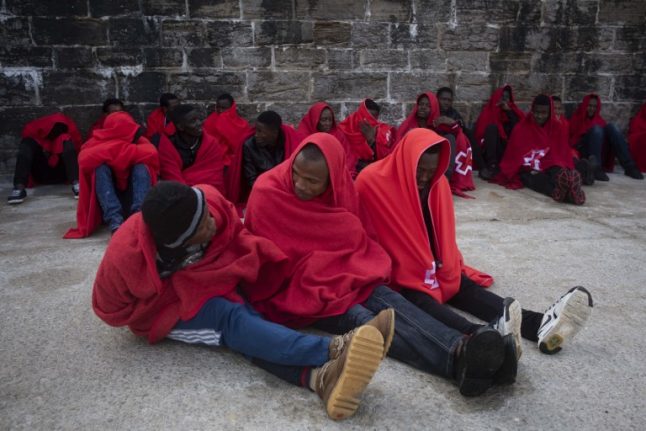 File photo from a Spanish coast guard rescue in the Strait og Gibraltar earlier this month. Photo: Marcos Moreno/AFP
In the largest of the operations, 262 people on 15 vessels were rescued in the Strait of Gibraltar, Salvamento Maritimo said on Twitter.
Twenty-seven others were found in the Mediterranean between Spain and Morocco and 129 more off the Canary Islands in the Atlantic Ocean.
The operations come six days after 630 migrants arrived in the Spanish port of Valencia aboard three vessels, including the NGO rescue ship Aquarius. The Aquarius rescued the migrants off Libya's coast on June 9 but Italy's new populist government and Malta both refused to let it dock, triggering an international outcry before Spain stepped in to help.
Germany has called an EU mini-summit for Sunday to discuss the migration issue.
Spain was the third most popular destination for migrants in the European Union last year after Italy and Greece. Most migrants travel in packed boats from Morocco's northern shore to Spain's southern coast, a distance of over 100 kilometres depending on the route.
Also on Saturday, a vessel from the world's leading container shipping company Danish Maersk Line rescued 113 migrants off the coast of southern Italy.