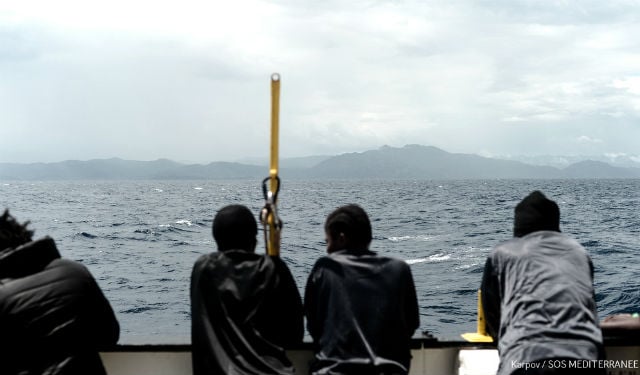 Migrants on board the Aquarius rescue vessel survey the coast. Photo: AFP/ Medecins Sans Frontières
The ship's plight has caused a rift across Europe this week, but Spain has agreed to take the 629 migrants after Italy and Malta refused the ship permission to dock. It is scheduled to arrive in Valencia on Sunday.
“Spain can not rule out anything,” said government spokeswoman Isabel Celaa after a cabinet meeting. “Spain is acting totally normally, as Europe usually works,” she added in response to a journalist who asked if the government would rule out sending Aquarius passengers back to their countries of origin.
Every migrant “will know if he has refugee status, if he is an economic migrant, and also, indeed, if he is guilty of certain offences that make him liable to expulsion,” added the spokeswoman for the government of socialist
prime minister Pedro Sanchez, who came to power on 1 June.
Once on EU soil, migrants can apply for asylum in the first European country they enter. If rejected, they can be returned to their country of origin.
Celaa insisted that Spain's priority was “respect for human dignity, respect for human rights”, referencing the government's aim to remove barbed wire from the fences around Spain's enclaves of Ceuta and Melilla in northern Morocco.
She also announced that Spain would repeal a regulation limiting access to care for illegal immigrants. Meanwhile, Doctors Without Borders (MSF), who along with French charity SOS Mediterranée are treating migrants on board Aquarius, said two passengers drowned last weekend when the ship first encountered difficulties off Libya.
MSF said it could only confirm the deaths now because many of the passengers took several days to recover from shock.