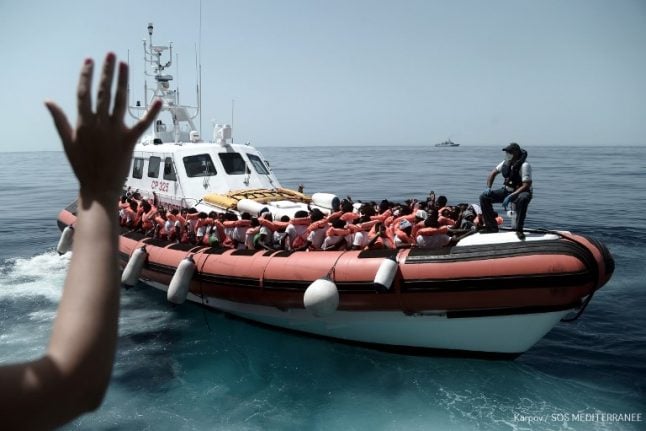 Rescued migrants and MSF personnel on board an Italian coastguard ship following their transfer from the French NGO's ship Aquarius on route to Spain. Photo: AFP / MSF/SOS MEDITERRANEE / KARPO

The Aquarius is transporting 106 migrants to Valencia having left Italy on Tuesday night for the 4-day journey is expected to arrive on late Saturday or early Sunday.

The rest of the 523 migrants that had been rescued by the SOS Mediteranee NGO ship have been transferred to the Dattilo and the Orione, the two largest ships in the Italian Coast Guard fleet, which will bring them to Valencia.

The sea conditions are stormy, with many of those on board reportedly suffering from seasickness.

UPDATE: #Aquarius was instructed by Italian coastguard ship to detour along eastern coast of #Sardinia while en route to Spain in hope this would shelter exhausted and seasick rescued people onboard from bad weather. pic.twitter.com/YTkD3JGygl

On arrival in Valencia Spain´s Deputy Prime Minister Carmen Calvo (R) and Valencian regional President Ximo Puig (L) give a press conference in Valencia as the city prepares for the arrival of hundreds of migrants stranded for days on the French NGO's ship Aquarius. Photo: AFP

The arrival of the three ships transporting the group of rescued migrants will be staggered so there is time to assess and process each of those on board, explained Carmen Calvo, the deputy PM on Thursday.

“Some will then be taken directly to migrant detention centres (CIE)  and other to humanitarian aid centres depending on their condition,” she said, adding that the priority was to address the humanitarian crisis and then deal with the legal status of each migrant.

“We are worried about the unaccompanied children, and the people who have been victims of some sort of crime. Such as those who have been trafficked with the purpose of sexual exploitation,” she said.

Those who need medical treatment will be transferred to hospitals where spaces have been allocated.

Anyone stepping foot on Spanish soil has the legal right to request asylum, so those rescued by the Aquarius may indeed request protection claiming fear of persecution in their own countries.

Those who come from countries such as Congo, South Sudan, Eritrea, Somalia, Adghanistan or Syria have a legitimate claim and will likely be allowed to process an asylum claim.

However, for those from countries such as Morocco, Senegal, Ghana or Algeria, an asylum claim is more complicated. Interior Minister Fernando Grande-Marlaska said during an interview with radio Cope on Thursday that these migrants would be treated “in the same way” as the more than 9,000 migrants who have reached Spain by sea so far this year.

“It will be decided if a person should receive protection or not” by distinguishing between those who have endured “all sorts of calamities” to qualify for asylum, and those who come for “economic reasons”, the minister said.

Since the start of the year, over 9,300 migrants reached Spain's shores by sea, more than double the figure for the same period last year, according to the International Organisation for Migration (IOM).

The number of migrants who died while trying to reach Spain by sea has more than quadrupled to 244 as of June 10th from 61 last year during the same period.

Most migrants travel in packed boats from Morocco's northern shore to Spain's southern coast, a distance of over 100 kilometres (60 miles) depending on the route.

Spain was the third most popular destination for migrants in the European Union last year after Italy and Greece.

What happens after they arrive?

After passing through a police station to be identified, migrants are usually taken to one of seven longer-term immigration detention centres where they wait for up to 60 days for their fate to be decided.

Some 8,800 people passed through these centres last year, according to official figures. Human rights Watch and other rights groups complain that migrants are held in poor conditions in these centres and face obstacles in applying for asylum.

“A lot of people are released into the streets after 72 hours (at a police station), because currently there are no more places in the centres,” Carlos Arce, migration coordinator at the Human Rights Association of Andalusia (APDHA), told AFP.

These migrants are left to fend for themselves, without any follow-up or help from the government, he added.

For those who manage to formally seek asylum, the system is saturated.

Is there a 'siren call' risk? The government's decision to take in the migrants from the Aquarius, operated by SOS Mediterranee, has been generally well received in Spain, with dozens of cities and regions offering to give them shelter.

But the conservative Popular Party which ran Spain for six years, until they were ousted in a no-confidence vote on June 1st, quickly sounded the alarm that the move would act as a “siren call” for more migrants.

While the number of migrants arriving in Spain by sea has doubled, in Italy arrivals by sea have dropped by 73 percent over the same period last year to 14,330 as of June 10, according to IOM figures.

Sanchez cited “humanitarian reasons” for agreeing to accept the migrants from the Aquarius ship. The gesture contrasted with the policy under his conservative predecessor Mariano Rajoy whose government was often accused of only reluctantly accepting migrants.

“Spain is far from respecting the quota of migrants that has been assigned each country” by the European Commission, Spanish foreign Minister Josep Borrell said Wednesday.

The country pledged to receive 9,323 refugees who arrived in Greece and Italy but as of May 31st it had only welcomed 1,359, according to the Commission.