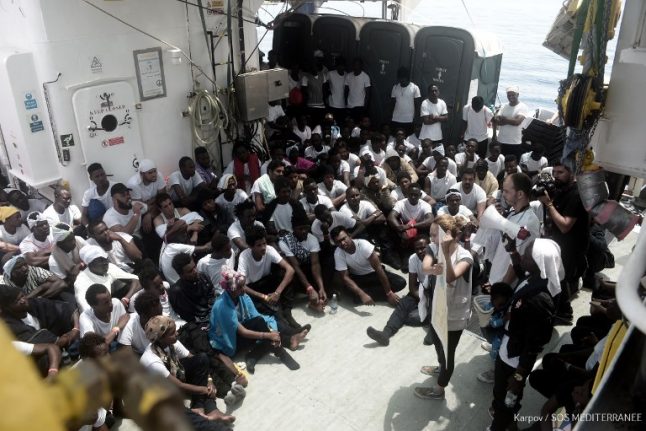 But when news came that Spain had agreed to let their rescue boat dock and take them in, they clapped and cheered, a Euronews reporter on board told AFP.

“The vast majority are happy. They started applauding,” said the correspondent, Anelise Borges.

“They were saying thank you Europe, thank you for letting us in. Some of them started joking about footballer players that play for Real Madrid and Barcelona, that they might be going to the same places as them.”

Rescued from the sea off Libya at the weekend, the 629 mostly African migrants are stuck on the boat after Italy and Malta refused to let them land in their ports.

READ MORE: Migrants on Aquarius to be transferred to Italian ships and taken to Valencia

They are “dehydrated and tired”, Borges said. The boat has capacity for 550 people but there are 629 on board sleeping wherever they can find space.

But “the situation on board is actually calm considering the amount of time people have been here and the things that they've been through,” she added. After Italy's far-right Interior Minister Matteo Salvini refused to let the boat dock, aid workers on board had to tell the migrants that they didn't yet know where they would be going.

“Naturally people became terrified. A man threatened to throw himself off the boat, saying he didn't want to go back to Libya. For some people the prospect of going back was really, really scary,” Borges said.

Members of the French aid group MSF went around the boat trying to reassure people, to avoid “a collective panic,” she said.

“That would have been deadly” in the overcrowded conditions, she added.

Among the 629 migrants are seven pregnant women and scores of minors.

“All of the pregnant woman are fine. Obviously they are tired. I spoke to one, she described what she had been through in Libya. She is traumatised. She doesn't want to go back,” said Borges.

“She asked me, 'Can I please call my husband who is in Libya? Can you please get me some fresh underwear? I want to change. I want to clean myself.'

So there are no medical emergencies or critical cases, but extreme discomfort,” she said.

“The children are the few who are still smiling. They are playing with whatever they can find.” The charity that chartered the vessel, SOS Mediterranee, said Tuesday that a supply of rations had been delivered by a Maltese Navy ship late Monday afternoon: 950 bottles of water as well as 800 portions of snacks and noodles.

A second delivery of food and basic necessities was made later Tuesday morning by the Italian maritime authorities, the NGO said.

“For now there is the feeling of, 'Okay we are going somewhere and it feels good to know where we are going to end up',” said Borges.

“But I don't think the migrants have thought about the fact that they need to stay on this boat for another three days,” she added.

“No one is highlighting that fact for the moment, because it is too much for people to handle.”