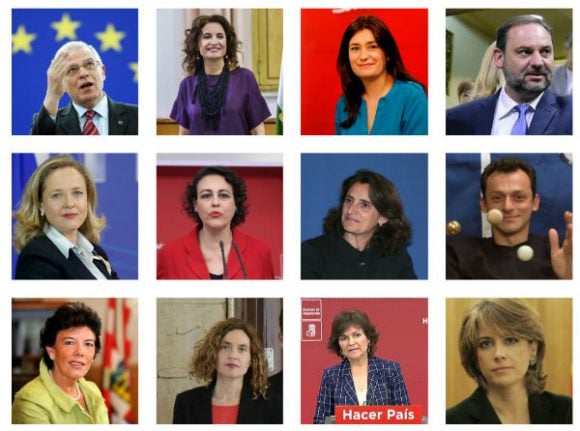 Pedro Sánchez is assembling a strongly pro-European cabinet which demonstrates that unlike the new Italian government, Spain remains more committed than ever to the European project and that Madrid’s deficit reduction commitments to the EU will be respected under Sánchez.

The new cabinet also includes two Catalans, whose anti-separatist stance has put them at odds with the regional government there, and whose presence sends the clear message, that despite relying on the Catalan-separatist vote to oust Rajoy, the unity of Spain remains non-negotiable.

The other stark fact about the new cabinet is that, for the first time, women outnumber men.

11 of the 17 cabinet positions, plus the role of Congressional party spokesperson, have been filled by women And at a time when women's rights and issues of equality remain at the forefront of Spanish politics, this can only be a good thing. The 46-year-old former economics professor sailed into the history books as the first Spanish politician to unseat a prime minister through a motion of no-confidence.

This remarkable feat was achieved despite the fact that Sánchez is not even an MP after he was forced out as party leader two years ago in a party revolt over refusal to break the political deadlock following two inconclusive general elections.

He then beat off a challenge by Susana Díaz, president of the PSOE in Andalusia to be re-elected seven months later.

Nicknamed ‘the comeback-kid’ and ‘Mr Handsome’ – he speaks good English and French. An EU budget manager is tipped to take over as Spain's new economy minister, a move that has been welcomed by Brussels.

She has been director general for budget at the European Commission, but has previous experience in the economy ministry under both the conservatives and Socialists before leaving for the European Union in 2006. A minister with strong EU credentials, this 71-year-old was president of the European parliament between 2004 and 2007. He also served as deputy finance minister, and then public works minister, under former Socialist prime minister Felipe González, who was in power between 1982 and 1996.

For a brief period he was leader of the Socialists when they were in opposition in 1998 but was forced to resign a year later after he was implicated in a financial scandal involving two of his former co-workers when he was deputy finance minister.

His appointment not only sends the message of Spain’s commitment to Europe but also serves to make a stand on Catalonia.

Borrell is from Catalonia and has been very vocal in his opposition to the wealthy northeastern region's separatist drive, drawing criticism from independence supporters there.

“Borrell’s appointment makes the government’s stance on Catalonia very clear,” the Socialist party’s head of organisation José Luís Ábalos said on Tuesday. “We aren’t negotiating or committing to anything.”

Minsiter of the Regions: Meritxell Batet Another Catalan, Meritxell Batet, has been chosen to become minister in charge of relations with Spain's regions. She will have the prickly task of trying to ease the situation in her deeply divided home region.

Introducing Carmen Calvo, new Spanish VP. She was minister of Culture in a previous PSOE cabinet. She said direct rule was necessary to “calm down Catalan society and restore Catalan economy”. pic.twitter.com/HdXFRQ2La8

A former minister of culture under José-Luis Rodríguez Zapatero, this 60-year-old from Cordoba has held the Equality brief in the Socialist Party under Sánchez. With a doctorate in constitutional law she was chosen to represent the PSOE in negotiations with Rajoy’s government over the implementation of Article 155 in Catalonia, which imposed direct rule from Madrid after the declaration of independence last October. A former judge at Spain's top-level National Court will head up the interior ministry. From the Basque Country, he took on high profile cases against Basque separatist group ETA and was once the target of a terror plot to assassinate him. He is one of the most influential advocates of LGBT rights and was married his husband  in October 2005, within months of Spain allowing same-sex marriages.

This portfolio in the Treasury and Public Administrations puts Montero in charge of setting the public sector spending ceiling for 2019, a necessary first step for Spain’s local and regional governments to make their own budgets

The Socialist are expected to announce a rise in spending after years of austerity under the conservative PP but are still confined by the public deficit reduction obligations. Brussels set a target of 2.2 percent of economic output for 2018, down from 3.1 percent in 2017.

Montero has been in charge of spending in Andalusia and is a close aide of Susana Díaz. Her appointment has been seen as a desire to close the rift between old rivals Sánchez and Díaz and exert influence within the Andalusian arm of the PSOE, which is the most powerful in Spain.

With strong credentials in environment policy and as a global negotiator in the field of climate change, Ribera returns to the ministry she worked in during Zapatero’s government. She moved on to work in the renewable energy sector, as a consultant for solar energy firm Isofoton and then Iddri, the Paris-based think tank on climate change.

Seen as the ‘party peacemaker’ Valencia-born Ábalos has negotiated between the party barons and the leadership and is seen as key to maintaining cohesion in the fractured party. He has acted as party spokesman and will now takeover the portfolio of Public Works, Infrastructure and Transport. The second Valenciano in the cabinet is new health minister Carmen Montón. Born in 1976 and trained in medicine, Montón has been head of health services in the Valencia region and rose to prominence under Zapatero as a key supporter of the law to allow same-sex weddings. This Madrid-born aeronautical engineer was part of the first team of astronauts in the European Space Agency that went into space in 1998.

A politician in the regional government of Castilla–La-Mancha where she had portfolios for employment, tourism and justice before taking on the social security brief in the region. She has been an MP in Spain’s national parliament since 2011. A high-profile prosecutor whose expertise is in the fight against jihadist terrorism, she is close to the controversial ex-judge Baltasar Garzón who was struck off after trying to bring the crimes committed under the Franco-era to court.

The 47-year-old award-winning author and journalist has been chosen as Culture and Sports Minister. He has written six novels, a travel book, a children's story and a graphic novel and is a member of Spain's Academia de las Ciencias y las Artes de Televisión.

Our @EU_EESC Secretary General @__LuisPlanas has been appointed Minister of Agriculture in the new Spanish government today.

Members and staff at the EESC wish him success in this new challenge!

Read more on his background in our PR: https://t.co/pT4ou3F3xM pic.twitter.com/gR13Rez09Q

Originally from Valencia and a committed European, Mr Planas played an active part in bringing about Spain's membership of the European Union as a member of the Spanish negotiating team.

In 2012 he was appointed regional minister for agriculture, fisheries and the environment in Andalucía, and in 2014 became secretary-general of the European Economic Social Committee. A former judge, Robles has the distinction of becoming the first woman in Spain to preside over a National Court and the third to serve on the Supreme Court. A veteran in the Socialist party, she was a secretary of state in ministry of Justice and Interior during the governments of Felipe Gonzales and was a Supreme Court Court between 2004 and 2016 before announcing her return to politics.

She was second on the PSOE list for Madrid in the general elections of May, 2016. A  former Socialist spokeswoman in Madrid regional government for employment, industry, budget and treasury, Maroto, 44, will take up a role in the cabinet. She has been associate professor in economics at Madrid's Carlos III university since 1999. The role of new government spokesman in congress has fallen to Adrina Lastra, a 39-year-old from the Asturian beach town of Ribadesella and one of Sánchez’s most loyal supporters. It isn't a cabinet position but will Lastra a high profile face of the PSOE:

She will have the difficult job of conveying the government’s stance in a parliament where it holds only 84 out of 350 seats.