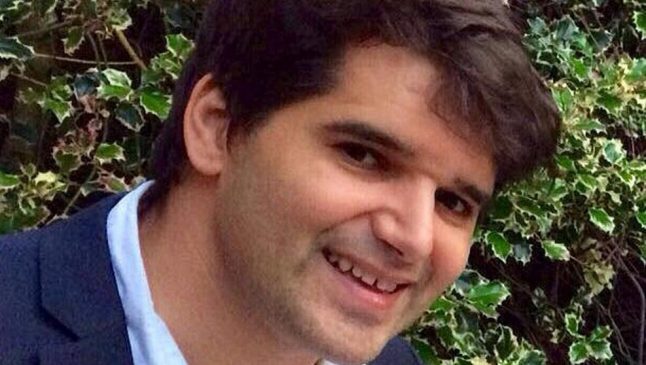 “He was a good man. And I want people to know that he always wanted to do good,” Joaquin Echeverría told the BBC in an emotional interview to mark the anniversary of the attack.

Echeverría, an HSBC expert in fighting money-laundering who lived in London, was one of eight killed in the June 3rd attack that saw three men mow down people in a van before going on a stabbing spree in the Borough market area.

The 39-year-old had rushed over to help a woman being assaulted and tried to defend her with a skateboard he had with him, prompting British media to dub him the “skateboard hero.”

“Ignacio intervened in the fight. And the next thing his friend said is that Ignacio was then being struck by the three terrorists,” explained his father, who lives in Las Rozas, an upmarket suburb to the west of Madrid.

“Two of the terrorists surround Ignacio and he’s distracted hitting the terrorist in front of him. And they stab him and he falls to the ground,” he said.

Echeverría was posthumously awarded the Great Cross of the Order of Civil Merit by the Spanish government which recognises “extraordinary services” by Spanish and foreign citizens.

But it was the tribute of a grieving father on the year anniversary of the attack that seemed most poignant.

“I think Ignacio did what he had to do,” his father said as his voice cracked and his chin trembled. “And I wouldn’t expect anything less.”

The reporter, Tom Burridge, commented that “many would have run away in that situation. He didn’t.” prompting the father to reveal more about his son’s character.

WATCH: The BBC interview in full

Our video remembering Ignacio Echeverría – a very brave Spanish man – who stood up to the scourge of modern day terrorism. The word ‘hero’ is sometimes overused…but this guy truly was one #LondonBridge https://t.co/s3O927hWFB

“Ignacio confronted situations, not like this one, when he had to stand up and be counted, to resolve problems for others. And that’s what he did. It wasn’t something new.”

He father revealed that just a few months before, when Ignacio had been visiting his home at Easter, the family discussed the then recent attack in Westminster during which PC Keith Palmer had been killed after confronting the terrorist.

“We spoke about him and we thought he was a hero. It seemed to us he went towards a (certain) death.

“And Ignacio said: ‘If I had been skateboarding past there on that day, that police officer would be alive.”

The father recounts how his other son, Ignacio’s brother had said: “So you would be dead?” and Ignacio replied: “Well.”

British Prime Minister, Theresa May, also paid tribute to the Spaniard during a commemoration in Southwark. Britain's Prime Minister Theresa May (C) lays a floral tribute at Southwark Needle on London Bridge, London on June 3, 2018, during a commemoration service on the first anniversary of the London Bridge terror attack. Photo: AFP

“Today we remember those who died and the many more who were injured, and also pay tribute to the bravery of our emergency services and those who intervened or came to the aid of others,” said May.

'The many stories of courage demonstrated that night will always stay with me – such as Ignacio Echeverría, who died after confronting the terrorists with the only thing he had, his skateboard.”

During a service held at Southwark Cathedral all the eight victims were remembered.