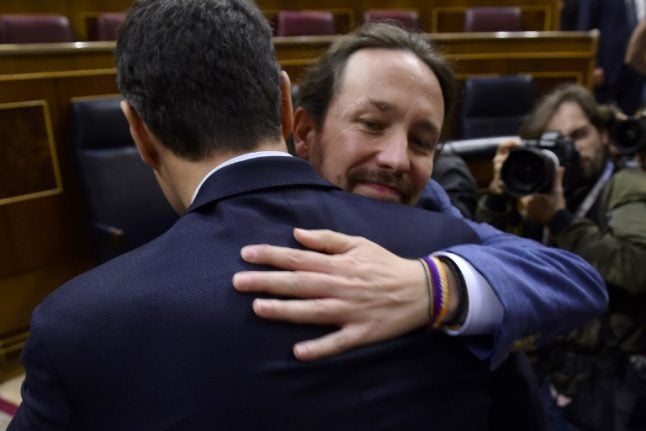 Despite his support in the no-confidence vote, Pablo Iglesias has not secured a cabinet position. Photo: AFP

Podemos had argued that including other parties in Sanchez's government would make it more stable but asked during an interview with public television TVE if his cabinet would include members of Podemos, the Socialist party's deputy secretary general Adriana Lastra said: “No”.

“In a few days, the names of those who will form part of the government will be made public,” she said, adding it would be an “essentially Socialist” administration.

Sanchez, a 46-year-old economist with no government experience, was sworn in on Saturday, a day after ousting Rajoy's minority conservative government in a no-confidence vote in parliament sparked by fury over a corruption scandal. While the Socialists only have 84 lawmakers in Spain's 350-seat lower house of parliament, the motion passed with the support of several tiny regional parties and Podemos which, with a regional ally, has 71 seats in parliament.

Lastra said the Socialists plan to call early elections, before the legislature expires in 2020, but did not specify a date.

Podemos spokeswoman Noelia Vera confirmed that Sanchez had not invited “for now” anyone from the party to be part of his government.

“We told him it is possible to build a courageous, solid government,” she added.

“But it seems that this will not be the choice of Pedro Sanchez, who is going to opt for a weaker government, which will find it difficult to adopt progressive measures.”