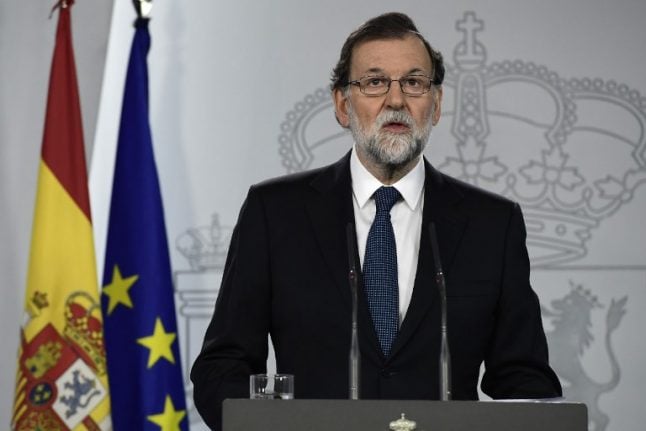 Mariano Rajoy was elected as PM in 2011. Photo: AFP

When the Basque nationalist PNV party announced it would give its decisive support to a Friday vote of no-confidence to oust Rajoy over his party's corruption woes, it became all but certain to succeed.

Barring any last-minute U-turn, the no-confidence vote instigated by Rajoy's rival Socialist party chief Pedro Sanchez will prove the nail in the coffin of a man variously described as an uncharismatic and rigid do-nothing or a stellar strategist with strong political acumen.

Critics had long pointed to the grey-bearded, bespectacled 63-year-old as a leader who governs by sitting back — or going on one of his much-loved power walks — and waiting for whichever storm is lashing Spain to blow over.

But this particular storm appears to be one too many.

“The party is over,” said Joan Baldovi, a lawmaker from the eastern region of Valencia.

Until now, Rajoy had managed to emerge relatively unscathed from the various crises lashing his party.

So it was that despite a series of corruption scandals that hit his conservative Popular Party (PP) and deeply unpopular austerity measures taken during his first term, the PP was re-elected in the 2015 general election.

It may have lost voters and its absolute majority, but it still came first. What happened in the next 10 months was an unprecedented political crisis marked by inability among Rajoy's bickering rivals to agree on forming an alternative government and fresh elections which the PP won again.

Eventually in October 2016, Rajoy was sworn in as prime minister for a second term at the head of a minority government, a respectable comeback even if he emerged weakened.

Since then, other crises have come his way, not least Catalonia's failed attempt to break from Spain last October.

There again, he was criticised for doing little to ease the situation but his eventual imposition of direct rule on the deeply divided northeastern region did not spark the unrest many had expected.

Satirists like to mock his infamous truisms — Spain “is a great country full of Spanish people” was one such declaration in 2015 — and while his talent does not lie in speech-making, he often shines in parliament with his witty repartee.

On Thursday, Rajoy launched a last-ditch defence against the no-confidence vote, listing the many graft cases also involving the Socialists over the years.

“Are you Mother Teresa of Calcutta? With what moral authority do you speak?” he asked Sanchez.

Rajoy is married with two sons and a keen football fan, but little else is known about his private life, and his wife Elvira Fernandez is very rarely seen in public. Rajoy kisses his wife, Elvira, on the balcony at PP headquarters in Madrid after winning the election in November 2011. Photo: AFP

Born in 1955 in Santiago de Compostela in the conservative northwestern Galicia region, Rajoy is the eldest son of a provincial court president.

Trained as a lawyer, Rajoy turned to politics at a young age, joining the Popular Alliance, the party founded by ministers of former dictator Francisco Franco which later became the PP. Rajoy beside then PM, Jose Maria Aznar in Congress in 2003. Photo: AFP

He later became the right-hand man of Jose Maria Aznar, who was Spanish leader from 1996 to 2004, serving in several ministerial posts.

As spokesman for the government in the later years of Aznar's leadership, Rajoy shielded him from criticism over his handling of the 2002 Prestige tanker spill and Spain's participation in the 2003 invasion of Iraq.

Aznar appointed him as his successor, but Rajoy went on to lose two general elections to the Socialists before voters finally handed him the premiership in 2011 as Spain suffered the ravages of an economic crisis.

A series of corruption scandals also caused fury at a time of deep economic crisis.

But Anton Losada, a politics professor at the University of Santiago de Compostela who has written a book about Rajoy, said the party may not be completely over.

He said there was still a chance Rajoy could come back as early elections will likely be called, he will likely be the PP's candidate again… and possibly win.

“I think you can only say Rajoy is dead when he's actually dead, not before.”