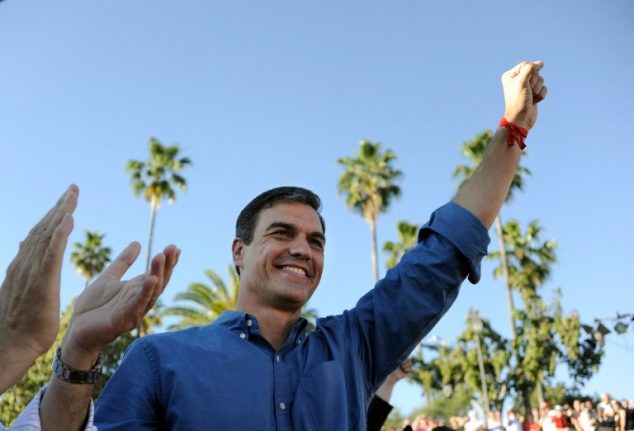 Pedro Sanchez on the campaign trail in Sevilla in 2016. Photo: AFP

The instigator of a no-confidence motion against Prime Minister Mariano Rajoy, whose Popular Party (PP) was involved in a mega corruption trial, the former economics professor is poised to see it succeed.

“Your isolation, Mr Rajoy, is the epitaph of a political era — yours — which is already finished,” the 46-year-old, nicknamed “Mr Handsome” in Spain, said Thursday in parliament.

“You're from the past, this country is on the verge of turning the page and Spain must look to the future without fear,” he added, impeccably dressed in a dark suit.

Back on centre stage “Fate is giving him the opportunity to play a central role,” says Fernando Vallespin, a politics professor at the Autonomous University of Madrid, adding Sanchez is attempting a “risky bet.”

Until then, the Socialist party had remained “on the sidelines of the frontline of political debate” which grouped together the PP, centre-right party Ciudadanos and far-left grouping Podemos.

With just 84 lawmakers in the lower house, Sanchez has been forced to forge deals with Podemos, Catalan separatists and Basque nationalists to oust Rajoy.

Slammed as a “Frankenstein majority” by the PP, it will be very unstable and could cut short Sanchez's time as prime minister.

But the Socialist party leader will likely “try to pass some policy initiatives to prop up support for his PSOE,” says Antonio Barroso, deputy director of research at Teneo Intelligence.

That, in turn, could put it in a better position for early general elections, which several polls suggest Ciudadanos would win.

“Sanchez is an audacious politician but not especially reflective and he thinks more in the short-term,” says Vallespin.

Born in 1972 in Madrid, Sanchez grew up in a wealthy family — his father an entrepreneur and his mother a civil servant.

Politics, though, was always his passion.

He was an opposition town councillor in Madrid from 2004 to 2009, after which he entered parliament as a lawmaker under Prime Minister Jose Luis Rodriguez Zapatero's administration. That ended when the PP swept to power in 2011 with an absolute majority, kicking the struggling Socialists out of power.

He arrived second in 2015 general elections after Rajoy, and he tried — and failed — to form an alternative government with Ciudadanos.

Fresh elections were called in June 2016 and the Socialist party registered its worst result since Spain transitioned to democracy after the 1975 death of dictator Francisco Franco.

Sanchez was subsequently ousted by his party, which held him responsible.

But he made a spectacular comeback in May 2017 when party activists voted him back to the Socialist leadership.

Having got closer to Rajoy over the past months in the face of a failed secession bid by the northeastern region of Catalonia, Sanchez is nevertheless close to bringing down a prime minister who had survived countless crises until then.

“Pedro Sanchez will go down in history as the Judas of Spanish politics,” Fernando Martinez-Maillo of the PP said recently.

Rajoy meanwhile accused Sanchez of “opportunism at the service of personal ambition” in parliament on Thursday.

Denouncing a “leader devoured by ambition,” the El Mundo daily portrayed him in a drawing as repeating his speech to parliament in front of a mirror.

“May those who want me to move house for a home surrounded by 58,000 square metres of garden with a tennis court, cook and butler vote yes,” he was drawn as saying, alluding to the prime minister's residence.