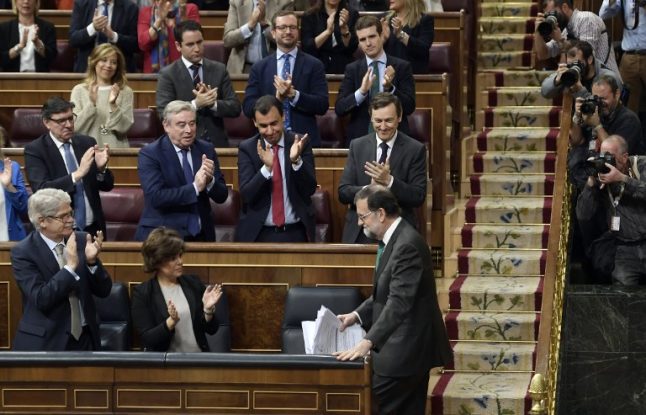 Rajoy during a debate on a no-confidence motion on Thursday morning. Photo: AFP

As lawmakers began a heated debate ahead of Friday's vote, Socialist leader Pedro Sanchez said Rajoy had lost credibility after last week's exposure of a vast system of bribes given to former PP officials in exchange for lucrative public contracts.

“Staying on as prime minister is harmful and is a burden not only for Spain but also for your party,” Sanchez said in remarks addressed to Rajoy.

“You can't force a country to choose between corruption and stability because there is no greater instability than that caused by corruption.”

Sanchez appears to be within striking distance of cobbling together an absolute majority of 176 lawmakers needed to force out Rajoy, who leads a minority government following his reelection in 2016.

Sanchez has pledged to call a fresh election within months if the motion succeeds. “The chances of a successful motion are on the rise,” said Teneo Intelligence analyst Antonio Barroso, who said there was a “65 percent probability” that the motion would pass.

The Socialists, who hold 84 of the parliament's 350 seats, have won backing for the motion from anti-establishment party Podemos, which holds 67 mandates.

And with the support of tiny regional parties including Catalonia's two main separatist parties, it could pull together 175 votes — just one short of the 176 needed to pass the motion.

Eyes on the Basques

All eyes are now on the Basque Nationalist Party (PNV) and its five lawmakers.

The party, which governs the northern Basque region with the Socialists but which helped Rajoy pass his 2018 budget earlier this month, has said it will decide on its position after hearing Sanchez speak in parliament on Thursday.

“Spain, in the hands of the PNV,” read the headline of the ABC and El Mundo dailies.

Last week the Madrid-based National Court, which deals with major criminal cases, said it had uncovered a vast system of bribes given to former PP officials in exchange for lucrative public contracts between 1999 and 2005.

The court sentenced 29 people with links to the PP, including a former treasurer, to jail and ordered the party to pay back 245,000 euros ($290,000) which it received from the scheme to help finance election campaigns.

Rajoy became Spain's first sitting prime minister to give evidence in a trial when he was called as a witness last year, prompting calls for him to resign.

'Not a corrupt party'

Rajoy has denied any knowledge of a party slush fund.

During the debate in parliament on Thursday, he said the case “does not concern members of the government” and repeated the PP's argument that only a tiny number of its politicians have been tainted by corruption.

“The PP has had corrupt people, I acknowledge it but the PP is not a corrupt party,” he said, before accusing Sanchez of “opportunism at the service of personal ambition”.

The court ruling is the latest in a string of graft scandals touching the PP. Dozens of PP members — including former economy minister and International Monetary Fund chief Rodrigo Rato — have been implicated in  graft cases, which opposition parties say shows entrenched corruption.

Analysts said Rajoy, who has been in power since 2011, would be politically weakened if the motion fails, with opposition parties expected to press further efforts to topple him.

The centrist Ciudadanos, which is riding high in the polls in recent months thanks to its hard line on Catalonia's separatist push, is pushing for early elections and has said it will no longer back the PP.

READ ALSO: What next? Scenarios after Rajoy's no-confidence vote