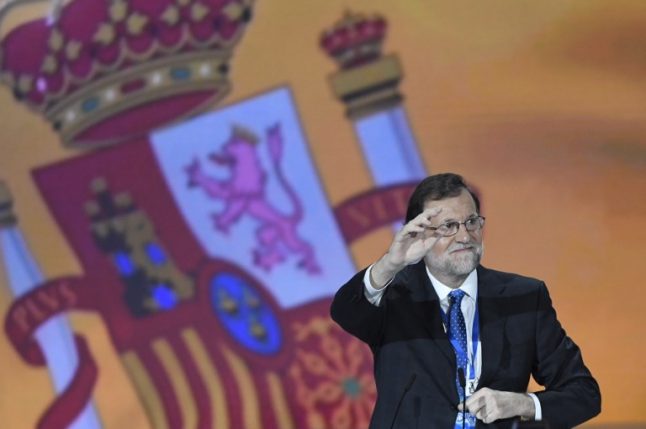 What next for Mariano Rajoy? Photo: AFP

All major opposition parties are calling for Rajoy to step down after Spain's National Court last week ruled the Popular Party (PP) profited from funds obtained illegally through “an authentic and efficient system of institutional corruption” including a slush fund.

But the main opposition Socialist party which filed the no-confidence motion has yet to secure the 176 or more votes needed in Spain's fragmented parliament to oust Rajoy, who survived a no-confidence vote in June 2017 called by anti-establishment party Podemos.

The no-confidence vote is expected to take place on Friday after it is debated in parliament. Here are three possible scenarios following the vote: The divisions among opposition parties offer Rajoy hope of survival but if he does remain in place he will be damaged politically and his grip on parliament will be even more shaky.

Rajoy's PP lost its absolute majority in parliament in the last general election in June 2016, and has relied on centrist party Ciudadanos, which has 32 seats in parliament, to pass legislation.

But while Ciudadanos, which is riding high in the polls, does not back the Socialists' no-confidence motion, it has said it would put forward its own no-confidence motion to trigger an election if Rajoy does not call an early vote — an option the prime minister has already ruled out.

“Even if Rajoy survives this time, his government will no longer be able to pass any policies, and the second half of the year could see further attempts by opposition parties to oust him,” said Teneo Intelligence analyst Antonio Barroso.

“The country will effectively be in deadlock given that Ciudadanos is no longer willing to provide its support.” The Socialists plan to hold new elections if their motion succeeds but only after having governed for “several months”, a party spokeswoman, former culture minister Carmen Calvo, said Saturday.

This would allow it to make “sufficient changes” in terms of “higher salaries and pensions, gender equality” and improvements to education, she added.

But the party has just 84 seats in the 350-seat parliament. Even if they are able to cobble together a “Frankenstein majority” to topple Rajoy that includes Podemos and several tiny regional parties, including Catalan separatists, they would be unable to govern because of their different priorities, said political consultant Ignacio Varela. Ciudadanos, which has come in first place in some recent polls thanks to its hardline on Catalan separatism, is pushing hard for  early elections.

Ciudadanos leader Albert Rivera repeated Monday that the corruption sentence against the PP has “liquidated” the current legislature.

Rivera added he was ready to discuss with Rajoy the legislature's “ordered end” by setting a date for new fresh elections, which he would prefer be held at the end of the year.

If this is not possible he would propose a new no-confidence motion that proposes an “independent candidate” to replace Rajoy instead of Sanchez who could secure final approval of Spain's 2018 budget and call fresh elections.

But parties need at least 35 seats in parliament to call their own no-confidence motion, and Ciudadanos has just 32 seats.

Fresh elections are opposed by the Basque nationalist party PNV, which opposes the arrival in power of Ciudadanos, which wants to reduce the privileges enjoyed by the northern Basque Country.

“We don't want elections…because that would be handing (power) on a platter to Ciudadanos,” PNV president Andoni Ortuzar sand in an interview published Sunday in regional daily Diario Vasco.