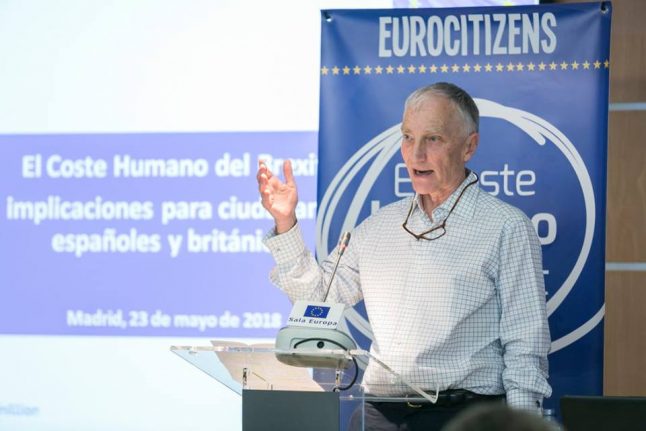 Michael Harris, chair of EuroCitizens, led a round table discussion on the human cost of Brexit in Madrid. Photo: Eurocitizens

Michael Harris, chair of EuroCitizens and steering group member of British in Europe, explains the present situation, how we got here and what we can do over the final months before ratification. The current draft withdrawal agreement, if a deal is reached, would protect the right of UKinEU citizens to live and work in their ‘host country’ after the end of the transition period on 01/01/21– until that date we retain our current status, though from 29/03/19 we will no longer be EU citizens and will lose political rights.

It is not clear if registration of UKinEU will follow existing procedures for EU citizens or will involve the more complex process of applying for a new status, like the ‘settled status’ required by the British government for EU citizens.

Social security coordination has also been agreed; this would mean the continuation of schemes like aggregated pensions and healthcare coverage for UK pensioners in the EU.

Along with EUinUK citizens, we will lose our rights to family reunification for future spouses and the right to return to our host country after an absence of over five years.

Both our EU and non-EU partners will have to undergo UK immigration procedures if we want to settle in Britain.

We will also lose our freedom of movement to live and work across the EU; to settle in another EU country we will be subject to immigration procedures for third-country nationals. We will not have the right to work or provide services in another Member State and our qualifications will not be valid there.

The loss of free movement and economic rights will have a profound effect on thousands of Britons who live, study or work in more than one country and do not fall within the narrow definition of ‘frontier workers’. A recent British in Europe survey revealed that 58 percent would be directly affected – extrapolated to total numbers of UKinEU that means 700,000 people.

The children of 42 percent of the respondents (500,000 people) would also be impacted. People will no longer be able to work or study in other EU-27 countries, will be unable to care for relatives (or receive care) or visit second homes for long periods – without going through third-country immigration procedures.

Theresa May stated on March 29th, 2017 that ‘we seek to guarantee the rights of EU citizens who are already living in Britain and the right of UK nationals in other Member States as early as possible.

Michel Barnier went further on May 3rd, 2017: “Our objective is clear: these men, these women, these families must be able to continue their lives as they are doing now for the whole of their lives.”

What has happened to these promises?

After the activation of Article 50, the British government ignored the EU 27’s initial offer to keep existing rights for citizens and, throughout negotiations, has shown more interest in reducing the rights of EUinUK citizens than in protecting those of their own nationals.

Meanwhile, the EU negotiators have adopted a narrow approach to maintain the integrity of the Union, regarding Britons as future ‘third-country nationals’ rather than European citizens who have exercised treaty rights.

Our free movement was held over by the EU until Phase 2 of the talks and, since December, the British government has not even brought it to the table.

Both sides claim that the March deal has safeguarded our rights when this is patently not the case. Sadly, we seem to be a low priority for our own government and the Commission has forgotten that we are still EU citizens.

Some people suggest that we acquire nationality in our host state, but this is not possible for many.

There are language and culture requirements beyond the reach of many retirees. Some countries require ten years’ residence. The process of application is expensive and long (over four years in Spain).

Member states like Spain and the Netherlands do not offer dual nationality for Britons, so you must renounce British nationality (though in Spain this requirement is currently not enforced).

Only a few months remain before the finalisation and then ratification of the withdrawal agreement. During this period EuroCitizens will be lobbying the Spanish government – we believe that Spain is sympathetic to our cause.

British in Europe will continue meeting the EC Article 50 Task Force, EU Council and the UK Government, and to lobby both European and UK Parliaments.

The European Parliament’s Brexit steering group has consistently defended our rights and a resolution was passed on 14 March, 2018 saying that no withdrawal agreement would be passed unless it contained our freedom of movement (amongst other stipulations).

We will be lobbying MPs at Westminster and UK political parties. On June 23rd, we will march in defence of citizens’ rights at the big People’s Vote demonstration in London.

What can you do?

Join a coalition group and help out. If you have not got time, you can make a donation. This whole process has been difficult for all of us and traumatic for some. Our only hope lies in sticking together and working together. Let’s not go down without a fight!