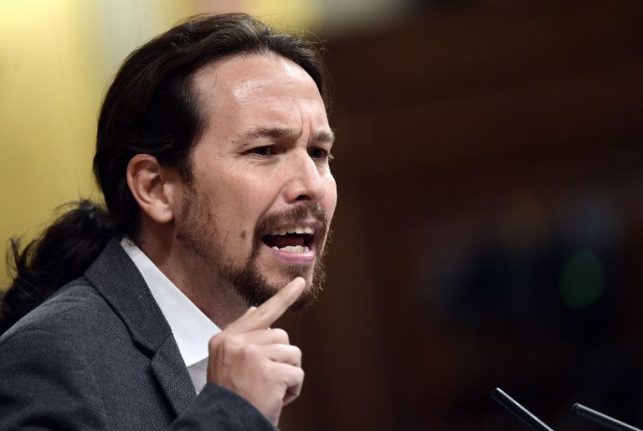 Podemos leader Pablo Iglesias along with his partner who is Podemos parliamentary spokeswoman Irene Montero, won 68.4 percent of the nearly 190,000 votes cast.

Nearly a third, 31.6 percent, voted against the couple remaining in their roles, Pablo Echenique, the party's secretary of organisation, said in a Facebook post.

The party's nearly 500,000 members were eligible to vote online from Tuesday until Sunday as to whether the couple should stay on in their roles.

READ MORE: Here's what you need to know about Podemos and that luxury villa Iglesias and Montero are expecting twins in the autumn. Photo: AFP

The couple, who are expecting twins, called the vote earlier this month after they were accused of hypocrisy for buying a house for over €600,000 ($700,000) with a swimming pool and guest house.

The purchase caused unease among the rank and file of Podemos, which was formed in 2014 to represent “the people” against “the caste” — as it called the country's political and business elites.

In the past Iglesias had made much of the fact that he lived in a modest apartment in Vallecas, a working class Madrid neighbourhood, that belonged to his great-aunt and bought his clothes in supermarkets.

He had also criticised politicians who “live in villas” and “do not know how much a coffee costs”, comments which have come back to haunt him.

“Would you hand over the nation's economic policy to someone who spends €600,000 on a luxury penthouse?” Iglesias wrote.

Analysts said that while the couple would likely survive the confidence vote, the scandal would taint the party's image that its leaders are ordinary Spaniards who understood the plight of workers and would cost it votes.

Podemos has become one of Spain's four main political parties after winning around a fifth of the vote in the 2016 general election.

READ ALSO: What next: Could a no-confidence vote oust Rajoy?