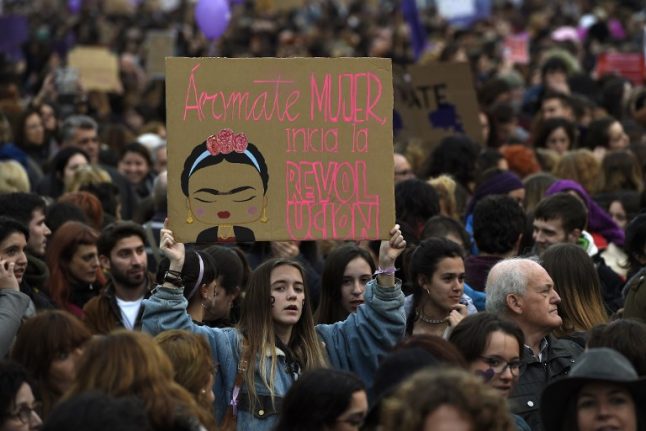 A protester holds up a placard with Frida Kahlo's words: "Woman, arm-love yourself, start the revolution" during a demonstration on International Women's Day in Barcelona. Photo: Lluis G

More than 29,000 people registered complaints of sexual abuse in 2017, an increase of 2.6 per cent compared with 2016, according to a report published on May 28th by Spain's National Statistics Institute (INE).

A further 6,900 individuals reported domestic violence. Nearly 1.5 women in 100 over the age of 14 have reported sexual violence, according to the data. Of a total of 36,000 reported incidents, more than 33,000 were reported by women.

Nearly half of the women who reported sexual abuse or domestic violence are aged between 30 and 44, according to the report.

More than 10 per cent of the victims were born in the USA. At least 32,000 perpetrators were tried, found guilty and sentenced in 2017, according to the report.

Perhaps most worryingly, there was a 14 per cent increase in reported cases of sexual assault against women aged under 18.

Spanish campaigners have held marches throughout Spain this year to highlight the plague of violence against women in the country.

Several recent cases of rape have highlighted what activists say is a failure by the justice system. One in particular, in which five men from Seville were recently found not guilty of sexual assault and the gang rape of an 18-year-old two years ago during San Fermin, sparked national outrage.

READ ALSO: As it happened: Spain expresses outrage as 'wolf pack' aggressors given only nine-year sentence

The evidence suggested the men had violently abused the victim. But the judges ruled that there had not been sufficient violence to sentence the men for sexual assault, sparking protests outside the court and across Spain.

The so-called 'wolf pack' case led to a huge outpouring of support on the streets and on social media and broad calls for reform of the justice system. Thousands of women shared their own stories of abuse in solidarity with the victim using the hashtags #Cuentalo (tell it) and #YoTambién (metoo).

READ MORE: OPINION Fighting the 'Wolf Pack': What next for Spanish women?