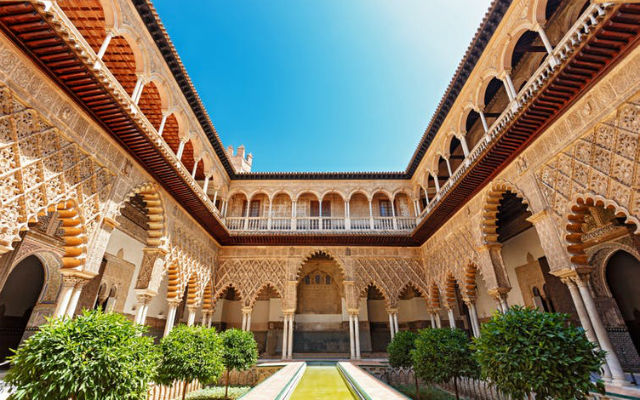 The Alcázar palace in Seville, once home to some of the Muslim rulers in al-Andalus. Photo: Shutterstock.com

Zaida’s bloodline reached the English shores through her engagement to Alfonso VI, king of León-Castile. From their offspring descended Isabel Pérez of Castile, who in the 14th century was sent to England to marry Edmund Duke of York, son of King Edward III of England.

Their grandson, Richard, Duke of York, led a rebellion against King Henry VI which developed into the Wars of the Roses. Richard’s second son Edward took the throne in 1461. Thus the legacy of Islamic Spain – better known as al-Andalus – found its way into the Plantagenet royal court.

This lineage has been of recent interest both in the UK and in the Middle East, as it purportedly proves a family relationship between Queen Elizabeth II and the Prophet Muhammad himself. Respected experts and commentators such as Burke’s Peerage and Ali Gomaa, the former Grand Mufti of Egypt, have suggested that Zaida was the offspring of al-Muʿtamid, ruler of Seville and a descendant of the daughter of the Prophet, Fāṭima and her husband ʿĀlī.

As a member of the Hashemite family, the descendants of Fāṭima and ʿĀlī, the Queen would count as relatives, among others, the supreme leader of Iran, Ayatollah Ali Khamenei, or the Aga Khan IV, Prince Shah Karim Al Hussaini, a close friend of the current Royal family.

Sadly, the theory of the Queen’s Hashemite lineage is too good to be true. The mysteries surrounding Zaida’s origins, the key to the puzzle, make it hard to sustain her potential right to rule over the realm of Islam. Be that as it may, there are valuable lessons to be learned from the Queen’s Spanish ancestor. The story of the marriage union between Zaida and Alfonso VI not only raises questions about race, ethnicity and cultural belonging, but also adds nuance to explanations of the contact between Islam and the Christian West.

A number of recent books and articles have presented the contact between “Las Tres Culturas” – as the Abrahamic faiths are commonly referred to in Spain – in one of two mutually exclusive ways. Spain was either a land of tolerance, better known as “convivencia”, or it was a theatre of war and inter-religious conflict. In fact, Zaida and Alfonso VI lived in a world which allowed little reflection on these modern debates. Zaida enjoyed the many luxuries of the court of the ʿAbbādid dynasty of Seville through her marriage to al-Fath al-Maʾmūn, the son of the emir al-Muʿtamid. While the accepted story is that Zaida was the daughter of the emir, recent studies have shown she most likely was an outsider, who gained access into the family’s inner circle through this marriage. By the 1040s, the ʿAbbādids supplanted Cordoba as the most prominent in al-Andalus.

This was a momentous change, since Islamic Spain had been ruled by the Umayyad dynasty for about 300 years. Under the rule of Zaida’s father-in-law, al-Muʿtamid, Seville experienced a “golden age” of culture, attracting famous poets from all corners of the Islamic Mediterranean, including Ibn Hamdis, and even al-Muʿtamid himself.

In 1091, Seville was captured by the Almoravid troops of Yūsuf b. Tāshfīn, and the emir al-Muʿtamid was exiled to Aghmat, near Marrakech, in Morocco, where he would die soon after, lamenting his own failures in his last poems. As Zaida fled from the disastrous Almoravid siege, in which her husband al-Maʾmūn was killed, her fate appeared sealed. In her hurried exit seeking refuge north of Seville, the princess was taken into captivity and sent to the Castilian court in Toledo, where she would find a new life. Her future husband, Alfonso VI, had long been a thorn in the side of al-Muʿtamid, particularly after May 1085, when the Castilian ruler seized the bustling city of Toledo from the local Muslim dynasty. Alfonso VI’s conquest of Toledo was a serious blow to the hegemony of al-Andalus in Iberian politics, causing panic among the different emirs of al-Andalus and fuelling the arrival of the Almoravids north of the Straits of Gibraltar.

Alfonso VI aspired to become the sole ruler of the Iberian Peninsula, including the Islamic territories. According to the 13th-century Tunisian chronicler, Ibn al-Kardabūs, the arrogant Castilian ruler even started to fashion himself as the “Emperor of the Two Religions”. In this context, the decision to welcome Zaida at the Castilian court – instead of sending her to Morocco to her relatives in exile – and Alfonso’s sexual relationship with the Muslim princess, was not as a sign of coexistence, but a confident statement of power.

Zaida’s position at the court was as poorly understood by Christian contemporaries in Spain as it is today. Some texts refer to her as a concubine; in fact, according to Pelayo, the famous bishop of Oviedo, Zaida was “nearly his wife”. And if the presence of the Muslim princess at court might have been a touchy subject in itself, Alfonso VI’s decision to make Zaida his legitimate spouse was even more perplexing.

The birth of Sancho, Alfonso VI’s only son, was the determining factor. Zaida then converted to Christianity, taking the same name, Isabel, later used by her famous descendant. Zaida’s bedroom, which had been so important in her rise to royal favour, also saw her fall. The princess died giving birth to one of the other two children she conceived with Alfonso VI while acting as Queen consort.

Queen Elizabeth II’s ancestors transgressed their religious, cultural and political boundaries in ways which are now difficult to classify. At the same time, the story of Zaida’s marriage to Alfonso VI is a reminder of the intimate and profoundly complex interlacing of our common Islamic and European pasts.