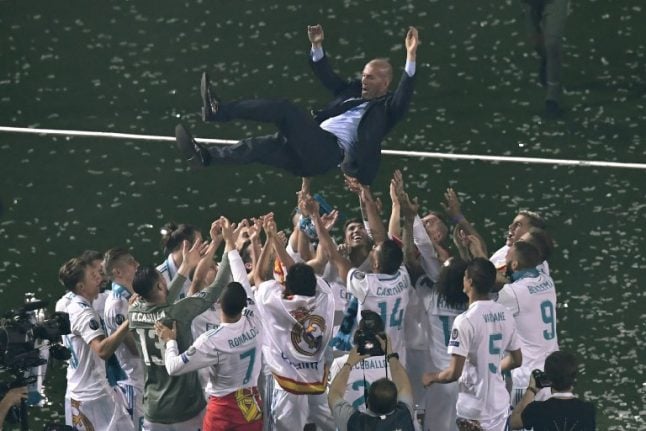 Photos: AFP
Elated fans cheered and waved club scarves as an open-top bus carrying the squad and the trophy made its way to the club's traditional celebration spot, the Plaza de Cibeles. Some children sat on the shoulders of their parents to get a better look as the bus went by.

The giant white bus was emblazoned with the phrase “Campeones 13” and the club's crest to mark their record-extending 13th European Cup success. Team captain Sergio Ramos and other players waved and filmed the crowd with mobile phones from the top of the bus, which was escorted by police on horseback.

Ramos took the walkway set up over the plaza's fountain and draped the statue of the goddess Cybele with the club's scarf and flag as the crowd cheered. He and Real Madrid left-back Marcelo then held up the trophy over their heads as white confetti rained down and the Queen anthem “We are the Champions” blared out from loudspeakers.

“I had to be here and celebrate this win with them,” Ivan Gonzalez, a 23-year-old student who wore a pink Cristiano Ronaldo jersey and a Real Madrid scarf wrapped around his neck, told AFP at the plaza.

The bus then made its way to Real's Santiago Bernabeu stadium where a celebration with fireworks will later be held. The crowd erupted in delight at the final whistle, breaking out in familiar chants of “Campeones, campeones”. Earlier on Sunday at a reception at the headquarters of the Madrid regional government, Ramos joked that winning the Champions League was “turning into a routine”.

“In the difficult moments, when people doubted us, this team showed it has pride and ambition, that it does not get tired of winning,” he added.

“I think this is the key of this success, along with having a great coach.”   Real's “decimotercera,” or 13th title in the competition, moved them six clear of second-placed AC Milan in the all-time honours list, after lifting the trophy for a remarkable fourth time in five seasons. The squad also stopped by Madrid city hall where they presented mayor Manuela Carmena with a jersey with the number 13 on the back that was signed by the players.

Carmena, who attended the match in Kiev, said Real had won thanks to the “magisterial leadership of its manager and the synergy of all its players”. Spanish Prime Minister Mariano Rajoy, a die-hard Real fan, sent a telegram to the club's president, Florentino Perez, to congratulate the team for their victory, which he said had “revalidated” the club's “continental leadership”.

“Thank you for this sporting show that filled all sports lovers with emotion and pride, and for once again taking Spain's name to the highest levels of world sport,” he added in the telegram, his office said in a
statement.

Rajoy had planned to watch the match in person in Kiev but he cancelled the trip at the last minute after the main opposition Socialist party filed a no-confidence motion against his government in parliament.

Real's victory made the front page of all main Spanish newspapers on Sunday. “Madrid dominates Europe with a legendary team,” headlined top-selling daily El Pais below a photo of Ramos holding up the Champions League trophy surrounded by the rest of his teammates.