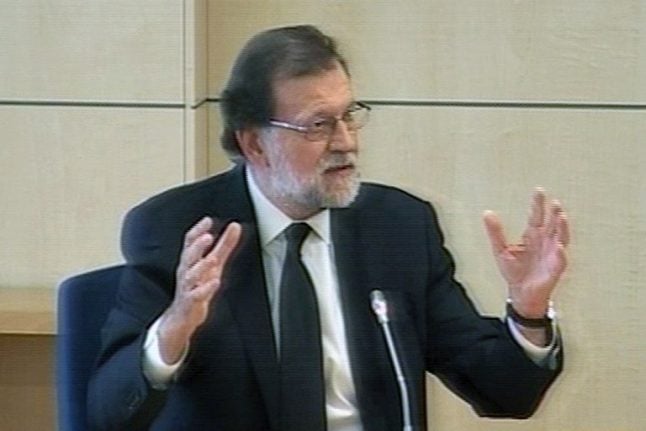 The Madrid-based National Court, which deals with major criminal cases, also sentenced businessman Francisco Correa, the brains of the graft network, to 51 years in prison and several former PP members to up to 38 years. The so-called “Gürtel” affair has for years been a thorn in the side of the conservative PP, which lost its absolute majority in parliament in 2015 partly because of corruption scandals.

The PP itself was not on trial for direct involvement in the scheme but was sentenced instead for having benefited from funds obtained illegally, which implies it may not have known where the money came from.

The sentence also confirms the existence of a “slush fund” within the PP, “a financial and accounting structure parallel to the official one that existed at least since 1989,” according to the 1,687-page sentence.

A separate trial is pending over the slush fund.

The man allegedly in charge of this slush fund was Luis Barcenas, the PP's treasurer between 2008 and 2009.

He was sentenced to 33 years and four months in prison and to a 44-million-euro fine for money laundering, tax fraud and other offences.

Barcenas, suspected of having hidden money in Switzerland, was the pillar of the corruption scheme along with Correa. During the trial, where 37 people were in the dock from October 2016 to November 2017, Rajoy was even forced to appear as a witness, the first acting prime minister to do so.

He told the court he had “never dealt with party financial matters.”

Albert Rivera, the leader of Ciudadanos which has supported the PP in parliament  and helped pass the 2018 budget said the Gürtel judgement further “complicated” Spanish politics which is already challenged by the crisis in Catalonia.  .

“This throws all of the plans for this parliament into doubt”, Rivera said. “We had seen politicians accused before, but never before had a governing party been found guilty of corruption; this marks a turning point.”

“The government of Spain has been found guilty of corruption. This weakens us at a delicate moment because of the separatist challenge”.

Meanwhile, Pablo Iglesias who is fighting for survival as leader of Podemos after being embroiled in his own scandal following the purchase of a €600,000 house, has called for a motion of no confidence in Rajoy.

The Podemos leader said the situation was “very serious” and that his party was “ready to support [Socialist Party leader] Pedro Sánchez if he tables one.”

“No advanced democracy can put up with a party of criminals in government,” Iglesias said.

The Popular Party immediately said it would appeal the ruling and that “profit-seeking participant” was a civil liability matter, not a criminal one.

The PP “does not share” the conclusions the 1,687-page judgement reaches, said a statement released by the party after the judgement..

“At no time has the Popular Party been accused [of a crime] or tried for one”, it continued: “we are talking about a civil liability”.