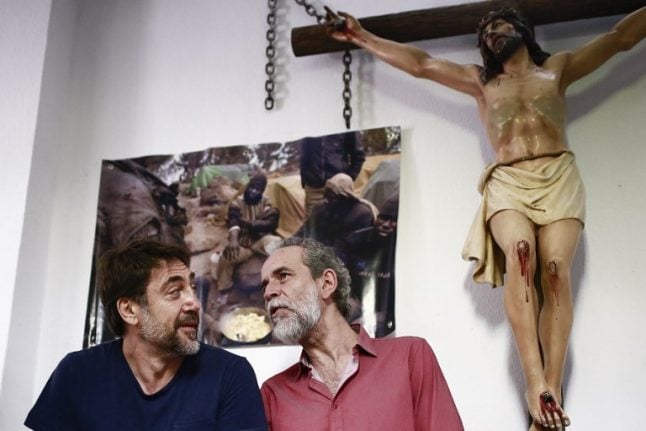 Javier Bardem defends his friend Will Toledo at a press conference in a Madrid church. Photo: AFP

“It seems to me that being able to (legally) punish (an opinion) is a setback that harks back to the era of Franco,” he told reporters in Madrid.

Bardem has offered support for actor Willy Toledo, who is due to be questioned by a Madrid judge for alleged blasphemy.

Toledo, 48, has refused to appear before the  judge after being summoned over a Facebook message in which he defended three women tried for blasphemy after they paraded in the southern city of Sevilla with a giant vagina, simulating a religious procession. The protest in March 2014 used a giant plastic vagina as if it was a Virgin Mary procession.Photo: AFP

Over the past months, several Twitter users and rappers have also been judged — and some of them jailed — for glorifying terrorism or insulting the king for comments or lyrics, a “repression” of freedom of expression according to Amnesty International.

He said that while some may not “agree” with Toledo, it was dangerous to “penalise thinking”, which he warned was happening in Spain “in a hidden, calm but constant manner.”

“I shit on god, and I have enough shit left over to shit on the dogma of 'the sanctity and virginity of the Virgin Mary',” Toledo, a cinema and television actor, wrote on Facebook.

He was denounced by the Spanish Association of Christian Lawyers for “covering god and the Virgin Mary with ridicule.”

Toledo did not answer a first summons for questioning on April 18th.

“I haven't committed any offence and so there is no need to appear before a judge,” he said.

The Madrid court has summoned him again on June 28th and has warned he can be detained and forced to appear.

Those found guilty of blasphemy can only be fined as the offence doesn't carry a prison sentence.

But Xavier Arbos, a constitutional law professor at the University of Barcelona, has warned there is a clear “regression with regards to freedom of expression.”

“We're sending a message that groups which feel offended can restrict (people's) freedoms via criminal law, and that's very negative.”