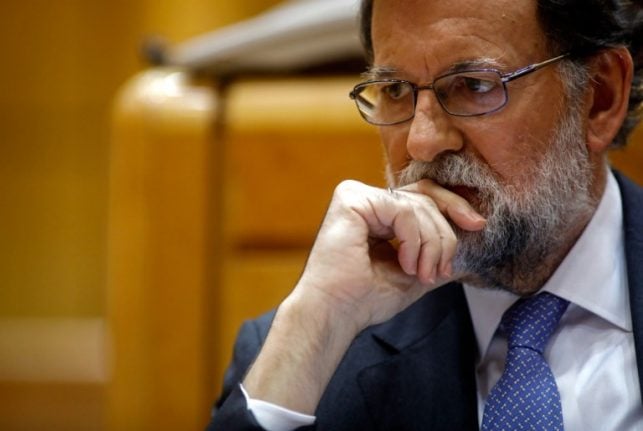 For the moment, Rajoy does not appear willing to give Catalonia back its autonomy after the region's new president Quim Torra created a new government that includes jailed and exiled former ministers who backed last year's secession bid, a move the prime minister rejected.

If Madrid does not ratify Torra's administration, the new regional Catalan government cannot assume office and thereby end the central government's direct rule of the region, which it imposed on October 27th after a failed declaration of independence.

As such, all eyes are now turned to the Basque Nationalist Party (PNV), whose five lawmakers are crucial for Rajoy's minority government in a parliamentary vote planned Wednesday on the 2018 budget.

The PNV, which rules the northern Basque Country region and treasures its autonomy, is not in favour of another region's autonomy being taken away and has conditioned its support on Madrid lifting direct rule on Catalonia.

It has said it will wait until “the last minute” to reveal its position.

“We are all for institutional stability, but we also believe that institutions should be able to govern themselves and decide,” tweeted Josu Erkoreka, spokesman for the Basque government and a member of the PNV.

Rajoy's Popular Party (PP) does not have an absolute majority in parliament since elections in 2016, and has been forced into a difficult balancing act to obtain the support of centre-right party Ciudadanos, the PNV and other regional groupings.

On Monday, Rajoy said he “hoped and was confident that the responsibility of other political forces will allow” approval of the budget.

“It's a good budget for Spain,” he said, adding it would allow the country to reduce its deficit below the level stipulated by the European Union — or three percent of GDP.

But for now, the situation is highly uncertain.

Fernando Vallespin, a politics professor at the Autonomous University of Madrid, says Wednesday's vote is “decisive” for Rajoy's future.

“It's very dangerous for Rajoy” as if the budget is rejected, it would be “a political failure… which would force him to shorten his term in office.”

If the parliamentary vote comes in negative, the Spanish government would still in theory be able to extend the 2017 budget.

But that would undermine Rajoy and he may then find himself forced to extend it again in 2019, which would be “very difficult” politically, says Vallespin.

The opposition Socialists and far-left party Podemos would not hesitate to “attack Rajoy by arguing he is incapable of governing the country,” says Antonio Barroso, deputy director of research at consultants Teneo Intelligence.

Rajoy's government has already made concessions to the PNV to secure its support.

It for instance accepted the party's demand to adjust pensions to the inflation rate after thousands protested in Spain — including in the Basque Country — for a better pension.

“The PNV wants to approve this budget as it is very beneficial for the Basque Country,” says Vallespin.

Its current resistance is merely political “as its voters don't like” direct rule imposed on Catalonia.

“What we don't know is how flexible this principle is,” adds Vallespin.